HOUSTON—Dr. Gerald B. Kieschnick, president of The Lutheran Church—Missouri Synod, emphasized the importance of forgiveness in his sermon for the July 10 opening service of the church body’s convention here. 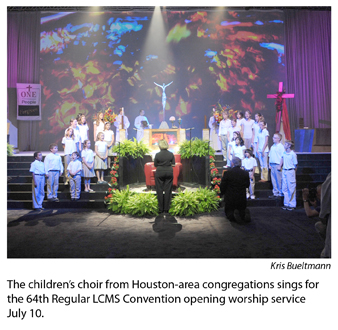 “As we begin this [convention],” Kieschnick told worshipers at the George  R. Brown Convention Center, “we do so in awe and admiration of our great and gracious and forgiving God, thanking Him for His forgiveness He offers us through Christ, seeking forgiveness from those against whom we have sinned, and forgiving those who have sinned against us.  Such is our duty. Such is our privilege. For we are one people — forgiven!”

The Synod’s 64th Regular Convention is meeting July 10-17 under the theme “ONE People—Forgiven.”  Among the approximately 3,000 participants are some 1,200 clergy and lay voting delegates.

Kieschnick asked, “Is there anyone in this room who does not need forgiveness? Of course not! We all need forgiveness! We know it and God knows it! That’s why He sent His Son into this world, to live, to die and to be raised — to be the all-atoning sacrifice for my sin and for yours and for the sins of all the world — to bring us forgiveness.”

“Offering forgiveness in Word and Sacrament is the business of the church of Jesus Christ that includes The Lutheran Church—Missouri Synod. That is the hallmark of our faith,” Kieschnick said.  Referring to the three “solas” (Latin for “alone”) of Lutheranism, he continued, “We believe, teach and confess that we are justified by God’s grace alone, saved by the God-given gift of faith alone, as communicated by God to the world in Holy Scripture alone.”

The 4 p.m. opening  worship service — hosted by Trinity Klein Lutheran Church of Spring, Texas — included “a multitude of pastors and musicians from area Houston churches [who] have collaborated for nearly two years to contribute their own gifts for worship,” according to an introduction in the worship folder for the service.

Providing music for the service were a seven-piece praise band, a 28-piece orchestra, an organ, and children’s and adult choirs with 24 and 136 voices, respectively.  The adult choir was visible through a translucent stage backdrop on which stained-glass images and other colorful art were projected.

On the stage was the main altar with an embedded plasma screen that displayed a video “flame” and other liturgical symbols, a lectern and a baptismal font  — all made by the Center for Liturgical Art in Seward, Neb., and all to be used during worship for the 2010 National LCMS Youth Gathering, June 17-21 in New Orleans. Also being used at both services is the communion ware that was commissioned for the Gathering.

Local pastors, the 35 LCMS district presidents and the president and vice presidents of the Synod distributed communion from a dozen other altars stationed in the convention hall — each one representing a Synod congregation in the Houston area.
Scripture readings and prayers throughout the service were offered in various languages.