CUS board applauds enrollments, meets with campus presidents

ST. LOUIS — The Concordia University System (CUS) Board of Directors, meeting here Sept. 12-13, adopted unanimously a resolution recognizing the efforts of the nine CUS campus presidents toward the continuing growth in total enrollment among the Synod’s colleges and universities nationwide.

Based on preliminary figures from the schools for the 2013-14 academic year, total CUS enrollment is up 7 percent. 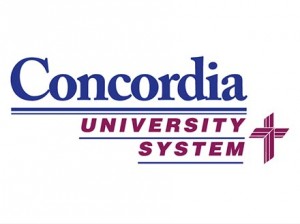 This fall marks the 22nd consecutive year that total CUS enrollment has grown, an “amazing” accomplishment in light of falling elementary and high school enrollments, according to CUS board Chairman Rev. Dr. Daniel Jastram, and “really something we should celebrate.”

The board also plans to send letters of commendation to each school’s president, staff and board of regents “for their leadership, resulting in the highest enrollment in history on the CUS campuses,” Jastram added.

In other business, the board met with the presidents of the CUS schools to “talk through matters of mutual interest,” according to Jastram. Topics included the need for “greater collaboration” among the presidents and the CUS board to enhance Lutheran education, he said.

Since the last such meeting was in 2011, “there was great benefit from sitting down together,” he said, as the participants “talked about the future of our educational system.” The campus presidents and CUS Board of Directors members learned to see from one another’s perspectives, Jastram told Reporter, and since the exchange was so beneficial, the parties have pledged to meet together more often.

The board also makes regular visits to CUS campuses, taking tours, attending worship services, eating in the cafeteria and talking to students and board of regents members.

“The CUS board has a responsibility to make sure that the Lutheran identity of each of our campuses is strong, that our academic quality is strong, and that our administrative structure and operations are strong,” said Jastram. “And so the purpose of these visits is to give each one of those campuses an opportunity to showcase the improvements that have been made and the quality of their programs.”

Concordia, Ann Arbor — which struggled with financial, enrollment and administrative difficulties — is now doing “very well” as part of the thriving Concordia, Mequon, university, he said.

“I think [the merger] shows how the CUS as a system is really negotiating new waters and facing new challenges and coming up with new results, historic results,” Jastram said. With “a lot of cooperation from all of the elements within the Missouri Synod Lutheran church” — including boards of regents, the CUS board, the Synod Board of Directors and LCMS districts, among others — it also shows what can happen when people work together for a common cause, he said.