Responding to the theological and religious-liberty implications of the U.S. Supreme Court’s June 26 decision regarding same-sex marriage, The Lutheran Church—Missouri Synod issued a statement from the Rev. Bart Day, executive director of the LCMS Office of National Mission, saying “we are saddened for our nation, even as we call our fellow Christians to faithfulness and prayer.”

“As Christians, we believe and confess that God Himself instituted marriage as the lifelong union of one man and one woman,” Day said in the statement found at thelc.ms/19Cdp5j. “As Christians, we proclaim this truth, no matter what the courts or legislatures may say.”

“Now there is a much larger looming issue,” said the Rev. Dr. Matthew C. Harrison, LCMS president. “This ruling portends a growing bureaucratic opposition to our First Amendment right to ‘free exercise of religion,’ our ability to speak the Gospel and our capacity to perform acts of mercy in caring for our neighbor, including those who struggle with same-sex attraction. Yet God is in His heavens, and we are baptized for this moment.”

The statement was issued shortly after the Supreme Court’s decision was announced. It was emailed to about 17,000 pastors and church workers, who were encouraged to share the statement with congregation members, family and friends “reminding them that the LCMS will continue to teach marriage according to God’s plan and gift.”

“We are called not to popularity but to truth,” Day said in the statement. “Therefore, we call on our fellow Christians to be faithful first to God’s Word, knowing that another court is ultimately supreme. Marriage is a fundamental building block of society, binding parents to their offspring.

“Every child benefits from the nurture of a mother and the leadership of a father.”

In the last week of its term, the Supreme Court announced its history-making decision in the case regarding the federal Defense of Marriage Act (DOMA) of 1996, which defines marriage as the union of a man and a woman for the purposes of federal benefits.

By a 5-to-4 vote, the court said part of the DOMA was unconstitutional. The court did not rule on the other provision of the law, which shields states from being forced to recognize same-sex marriages from other states, because it was not contested.

Legally married same-sex couples will now be entitled to claim federal benefits that are available to opposite-sex married couples. The ruling will not affect 36 states that ban same-sex marriage. 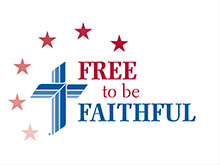 The court dismissed a related case, a challenge to California’s Proposition 8 that bans same-sex marriage, saying it did not have jurisdiction to issue a ruling.

In the LCMS statement, Day said the LCMS will continue to proclaim marriage “as a picture of Christ’s love for His bride, the church,” and that the LCMS “will continue to be a place of forgiveness, mercy and healing for all people.”

Day has spearheaded several marriage resources in recent weeks on behalf of the LCMS, releasing a “marriage toolkit” (found at lcms.org/freetobefaithful) that includes a Bible study, frequently asked questions on marriage, bulletin inserts and worship resources.

On June 19, Day also took part in the LCMS’ first-ever live “tweet chat,” which focused on same-sex marriage, the Synod’s understanding of marriage and what Scripture has to say on the matter. Day and Dr. Beverly Yahnke, executive director for Christian Counsel at DOXOLOGY: The Lutheran Center for Spiritual Care and Counsel, an LCMS Recognized Service Organization, served as moderators. (Click here to read a related story.)