For the second year in a row, three schools of the Concordia University System (CUS) have been named to the annual “Colleges of Distinction” list, by the organization of the same name. 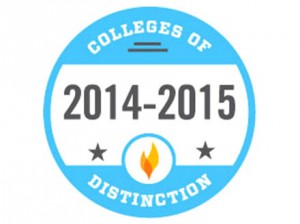 Nominated schools then go through a selection process that includes both qualitative and quantitative research. The organization looks for excellence in four areas: student engagement, the quality of teaching, the vibrancy of the college community and the success of graduates.

“The Colleges of Distinction list honors universities that have a vested interest in the development of students in mind, body and spirit,” said the Rev. Dr. Patrick T. Ferry, president of Concordia University Wisconsin. “Being named to this list signifies the deep commitment by faculty, staff and students to Concordia’s Christ-centered mission, strengthening our dedication to educate the best students for service to the world.”

Of being named to the list, Concordia University Chicago’s new president, the Rev. Dr. Daniel L. Gard, said, “Much has changed since the university was founded 150 years ago as a college for teachers. … What has not changed is the commitment of Concordia University Chicago to prepare men and women to serve the Church and the world through academic excellence grounded in the Gospel of Jesus Christ. We thank the Lord for these opportunities and for this recognition as evidence that learning and faith belong together.”

Colleges of Distinction, which was founded by concerned parents and admissions professionals, has been releasing its list of colleges since 2000. Chosen schools are featured in an “eGuidebook” that is sent to 40,000-plus high-school and community college counselors and distributed via Amazon.com, as well as being listed on the organization’s website.

Receiving this recognition “validates the Concordia Experience where faith and knowledge exist harmoniously and individual lives are transformed for service to others,” said Dr. Viji George, president of Concordia College—New York.

Megan K. Mertz is a staff writer with LCMS Communications.

Scattering seed on fields of battle — with catechisms, LSB