The Synod’s official periodical, The Lutheran Witness, has been around longer than Time magazine. Throughout those years, it has racked up scores of awards, and during its annual 2014 convention in Anaheim, Calif., May 4-6, the Evangelical Press Association (EPA) awarded the publication still more. 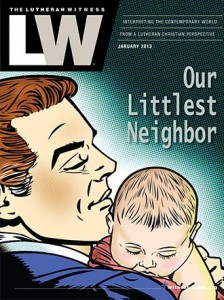 The magazine received an “Award of Merit” in the “Denominational” category and beat out Christianity Today to win fourth place in the “Single-Theme Section or Issue” category. The award-winning January 2013 issue focused on life issues during the 40th anniversary of the historic Roe v. Wade U.S. Supreme Court case.

“The Lutheran Witness is one of the best catechetical tools we have in the LCMS, so it’s no surprise to hear that it’s also award-winning,” notes the Rev. Dr. Matthew C. Harrison, president of The Lutheran Church—Missouri Synod. “I would encourage every Lutheran who wants to be able to understand the world through a Lutheran lens to pick up a copy. And if you have more questions, take that issue to your pastor. I guarantee he’d be happy to sit down and delve into any number of the topics more deeply with you.”

“Hearing that the life issue, written on the 40th anniversary of the historic Roe v. Wade case, won an award is also proof that we as LCMS Lutherans can’t talk enough about God’s gift of life,” Harrison explains.

Ed Szeto, special projects coordinator for LCMS Life Ministries, adds, “It’s important for The Lutheran Witness periodically to put together entire issues focused on the sanctity of human life with all its marvelous facets, even in a strongly pro-life denomination like the LCMS.”

The EPA was formed in 1948 and, according to its website, was created “to provide a united professional voice for evangelical publishers during a period in which evangelicals as a group were demanding ‘a place at the table’ in American society.”

The organization grew as it assisted with the mid-century “need for the development of Christian writers skilled in the techniques of traditional journalism,” which was felt to the point that one member wrote, “There is a serious dearth of writers and editors trained to serve Christian publications and dedicated to writing with a moral and Christian purpose.”

Today, the organization serves as a source of fellowship and camaraderie for some 400 “periodicals, organizations and individual members” and is a “a professional association of Christian publications — magazines, newspapers and newsletters — and content-rich websites.” In total, its publications “have a combined circulation of some 20 million readers.”

Continuing its goal of “interpreting the world from a Lutheran Christian perspective” is key to the magazine’s usefulness. “The Lutheran Witness is a key teaching tool for the church,” explains the Rev. Bart Day, executive director of the LCMS Office of National Mission, the umbrella under which LCMS Life Ministries falls. “The Lutheran Witness keeps [laity] engaged in contemporary issues while remaining anchored in the ancient faith. Kudos to The Lutheran Witness for being winsome and bold in confessing the faith and confronting issues straight on.”

Adriane Heins is executive editor of The Lutheran Witness.