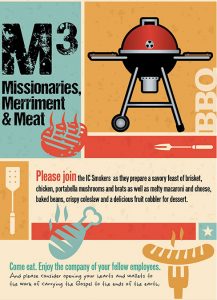 An anonymous donor provided another $1,000 — bringing the grand total to $6,000, which is being used to support LCMS missionaries.

Even though the total raised fell short of the $10,000 goal of the event — billed as “M3: Missionaries, Merriment & Meat” — “it was a very big success” in the opinion of LCMS Chief Financial Officer Jerald C. Wulf, one of three “IC Smokers” — a trio of experienced grill masters that includes the Rev. Bart Day, executive director of the LCMS Office of National Mission, and John Schoenfeldt, vice-president of Information Technology/chief information officer with the LCMS Foundation.

Past barbecues on the Synod’s campus have raised funds to support International Center employees with financial needs, but “this is the first time we’ve raised money to support missionaries,” Wulf said, which helped “build a sense of community” among employees for LCMS mission work worldwide.

“Even though it’s a lot of work for those who are preparing the meal” — which includes staying up all night supervising, as the brisket smokes for some 15 hours in a smoker on the IC parking lot — “it is very fun. And the employees really appreciate it. And I think that was reflected in the outpouring of free-will gifts.”

That sentiment was echoed by Barbara Clark, administrative assistant with the LCMS Office of Pastoral Education, who summed up the event this way: “The food was wonderful, and it was a privilege to give to help the missionaries.”

The unofficial motto of the IC Smokers, Wulf noted, is, “We love to serve the servants,” and he’s hoping the event will be repeated annually — to call attention to the Synod’s worldwide mission work as well as raise funds to help expand that work.

Day said he and his fellow IC Smokers “love doing the barbecue, and people love to support good causes,” so the event is a “win” for everyone. “The missionaries are our fellow workers. They are continually out in the field and we at the IC rarely have the opportunity to connect with them and support them in their work.”

Raising mission funds was “a special way for us to say thank you to our fellow workers in the kingdom,” he added, “and $6,000 will go a long way to support the international mission work of the church.”

The Rev. John Fale, executive director of the LCMS Office of International Mission, which places and assists the missionaries in their work, said the event “is a meaningful expression of support for our missionaries and is deeply appreciated. Because our missionaries are deployed, they are most often not recognized by other employees when they return for home service. News of this support will be very encouraging to our missionaries.”

Fale said the funds will be used to help newly called missionaries “in the development of their network support, enabling them to get out into the field more quickly.”

Members of the LCMS Board of Directors, which was meeting at the International Center at the time, also enjoyed the barbecue.

Board member Dr. Kurt Senske, president and CEO of Upbring, formerly Lutheran Social Services of the South, in Austin, Texas, called the brisket “amazing,” adding, “I was pleased to see that Rev. Bart Day continues to have at least a little bit of ‘Texan’ in him.” Before joining the LCMS staff in St. Louis in 2011, Day was associate pastor of Memorial Lutheran Church in Houston.

Senske called it “an honor” to take part in the barbecue, “mingle with the dedicated IC staff” and “contribute to the vital ministry of International Missions.

“As I spoke with many employees, I was impressed with their positive attitudes and commitment to raise money for International Missions. There was a great spirit among everyone who participated.”

Board Chairman Rev. Dr. Michael Kumm said the food “was absolutely delicious!” and called the event “a great effort by IC employees to raise funds to support the very programs they administer. … Congratulations to everyone involved, and thanks be to God!”