What’s in the March ‘Lutheran Witness’? 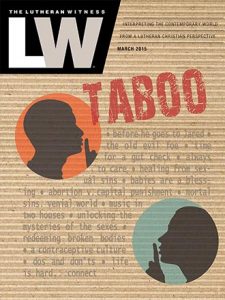 In a time when anything goes — when sex and pornography and abortion and polyamory are accepted as normal and when college campuses are inundated with values and ideals contrary to Scriptures and the Lutheran Confessions — very few things appear to be truly off limits to young people and to the Church anymore.

“The only thing, it seems, that is taboo anymore is whether or not we as the Church believe we have anything to say about [these issues],” the Rev. Marcus Zill, director of LCMS Campus Ministry, told the conference audience.

“Defending the faith, especially in university classrooms and college quads, will be one of the most difficult things you’ll do,” LCMS President Rev. Dr. Matthew C. Harrison added.

The March issue focuses on those taboo topics — the contraceptive culture, the death penalty, social media, sexual morality, depression, sin — and the fact that young Lutherans are discussing them on their own college campuses every day.

This issue also serves as an encouragement to young and old alike to remember that, despite the difficulty that surrounds some taboo conversations, “You are baptized into Christ,” as Harrison noted, “and that means that your beliefs and confession will be taboo to the world. But … you are baptized into Christ, and that means that no college professor or campus group can snatch you from Him, from the One who loves you, who died for you and who rose again … all for you!”