When I came to the St. Louis area and found a congregation to join (a community of believers gathered around Word and Sacrament for the purpose of spreading the Gospel of Jesus Christ throughout the world), I first asked the pastors and others who worked in the church office which congregation members performed services like lawn care, barbering, insurance, optometry, dentistry and other medical services that I might need. I believe that it is important to support members of my community, and my community was now the congregation to which God had led me. If I want to benefit my new community and its mission, in addition to my weekly offerings, I should support those who are its members with my business, so that the community may prosper.

I recalled a lesson from my micro-economics class that provided the reasoning for my thinking. In a community there was a farmer, a miller and a baker. The farmer grew wheat, which he sold to the miller that the baker bought and used to bake into loaves of bread and other bakery products that he sold to the farmer and the miller. In this system, there was $90 of currency. Each month, the farmer would sell some wheat to the miller and receive $30. The miller would sell his flour to the baker for $30, and the baker would sell bakery products to the farmer and the miller for $30. Over the course of a year, each had an income of $360 (a velocity [the number of times one dollar changed hands] of 12 times per year). As their families grew, the farmer had to sell more wheat at the mill each month, the miller had to grind more flour and the baker had to bake more bread, but the amount of cash did not change. Only the velocity of the cash through the system increased. When the velocity of the money doubled (to 24 times per year), each of their incomes also doubled to $720. As the velocity of money continued to increase in this closed system, so did each participant’s income, until it achieved a velocity of 52 or an income of $1,560. Without increasing the money supply in the system, each person was able to meet increasing needs by increasing the velocity of money within the community.

One day, the farmer visited a neighboring community and purchased $12 worth of bakery goods from the baker in that place for $9, because the goods were “on sale.” This transaction benefited the farmer and his family in the short-term. The result was that the baker’s income was reduced by $9, which meant that he could purchase less flour from the miller, who could then purchase less wheat from the farmer. The miller and farmer could buy less bread from the baker, and there were now only $81 in the community’s economy. In other words, the community would have to work harder and longer, increasing the velocity of money in the system to maintain the same income levels. The community became worse-off in the long-run for one member trying to achieve short-term savings from a different community.

While the above is an oversimplification, the point is that when we support our Lutheran community, such as the business people in our congregations who employ our congregation members, our publishing house, our financial institutions and the like, we all benefit by the increased velocity of money within our Lutheran community. When we believe we can save money by acquiring those same goods and services outside our community, we may realize a short-term benefit for ourselves, but in the long run, we all have to work harder to achieve our goals.

Being good stewards is not only about managing the resources God entrusts to us individually, but also about taking care of the community into which our heavenly Father has gathered us, so that those outside our community (our neighbors) see how we support and care for each other and want to become part of our community. Remember that Jesus taught us that our neighbors are those toward whom we act as a neighbor, regardless of who they are or where they might dwell. 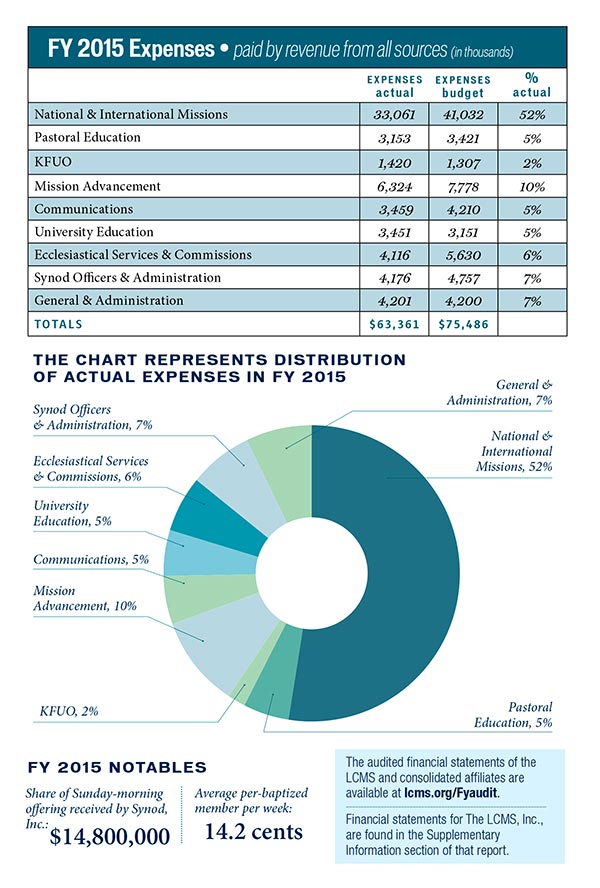