Article XV of the Constitution provides that constitutional amendments adopted by a convention become effective six months from the date on which ballots are mailed to the congregations of the Synod, “provided a two-thirds majority of the votes cast within that period shall have favored the amendment[s].” The Synod’s 2016 convention made three such amendments: 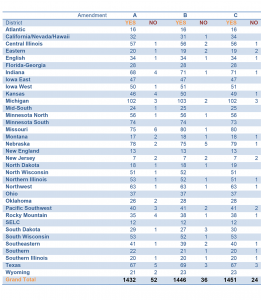 As each of the amendments has obtained the required two-thirds majority in the affirmative, each is therefore ratified and now in effect, and will be reflected as such in a forthcoming, updated edition of the Handbook.