Most of the volunteers 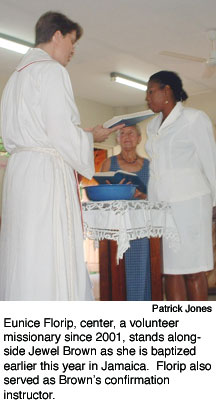 are serving as English-as-a-Second-Language teachers.  Others are serving in fields such as education, healthcare, agriculture, and community development.

Also recently placed were three “career” missionary families who have received calls from LCMS World Mission to serve overseas.  Those who have accepted such calls are:

As of Sept. 20, the Synod’s current missionary force includes 72 career families and 110 long-term volunteers.  An additional 138 “international educators” serve paid positions at Lutheran international schools in Asia, and more than 40 short-term volunteers — serving a week to six months — have been placed so far this year.

Those numbers are “slightly down” from 2003, according to Buchholz, but could nearly equal last year’s figures by year’s end.  For example, LCMS World Mission placed 84 long-term volunteer missionaries by Dec. 31, 2003; 68 have been placed already this year, as of Sept. 20.

Also last year, 52 short-term volunteers were placed by year’s end, compared to 43 so far this year.

The “greatest need,” Buchholz says, is for long-term volunteers.  Most of those who fill that category are either recent college graduates or retirees, and both groups provide excellent candidates for mission work, he said.  Recent college grads often are anxious to serve before they settle down with a career or family, and many retirees have the time, expertise, and financial resources to volunteer, he said.

Elizabeth Mowery, 22, graduated from the University of Wisconsin, Madison, last December with a degree in international relations and political science, and is now teaching English as a volunteer missionary in Puerto Barrios, Guatemala.  Mowery attended LCMS World Mission’s missionary orientation and training this summer in St. Paul, Minn., and arrived on the mission field in late August.

“After much prayer, I felt God wanted me to commit a year of full-time service to Him after graduation instead of immediately looking for a job in my field of study,” Mowery told Reporter via e-mail.  “I wanted to give my time and effort to people somewhere other than the U.S. at a time in my life when I’m easily able to travel and live abroad.”

Mowery said she is driven “to show God’s love to the people of Puerto Barrios through my service and my desire to speak about the Gospel message to those who have not yet heard.”

After one month, life on foreign soil has been “lonely in some ways, but I think things are going well,” Mowery said, as she plans classes and tries “to learn all the students’ names and meet church members and other people in the community.”

Eunice Florip, 70, of Grand Rapids, Mich., arrived in Jamaica in August 2001 to teach the children of LCMS missionaries Peter and Carla Kirby for a year.  But the Kirby children, Ian and Amanda, “were great students and it worked well for me to teach them for a second year,” Florip told Reporter.  When the Kirby family returned to the United States, Florip stayed on to teach another missionary couple’s children, and now she is teaching the children of a third.

“I kept reading in our church publications about volunteer work, and since I had retirement funds, I decided that though there were many ways to serve the people of Grand Rapids, I wanted to offer to go overseas,” she said of her decision to become a missionary.

“Knowing and working with the people of Jamaica is the greatest blessing of all,” Florip says.  “Being here to share in their needs, joys, sorrows and successes has been a blessing in my life, and they share that they appreciate me, too.

“It will be hard to leave them, if the Lord should lead me to do that.”

Buchholz encouraged anyone with an interest in serving as a missionary to call his office.  LCMS World Mission staff, he said, will provide a “strong, supportive relationship” to callers, from the initial phone call through the missionary’s training and eventual placement on the field.

For information, contact Personnel Services at (800) 433-3954 or via e-mail at personnel.services@ lcms.org.  Information about missionary service also is available on the Web at www.lcmsworldmission.org — click on “Get Involved,” then “Service Opportunities.”