Examples of how a successful mission “alliance” is formed — and explanations of why such alliances are necessary today — were shared at this year’s conference of the Association of Lutheran Mission Agencies (ALMA), Jan. 9-11 in St. Louis.

The conference drew about 85 participants.  Most of them represent 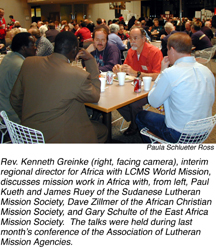 In these days of ever-tightening budgets, “it makes sense to pool resources and cooperate” in order to make a difference on the mission field, said Rev. Steve Hughey, director for mission partnership and involvement with LCMS World Mission and an ALMA conference planner.  Mission societies — with their own funding sources and volunteer pools — are becoming increasingly vital to successful mission work, Hughey said, and he stressed the importance of creating “alliances” that operate with “strategic plans.”

In one session, representatives of the recently created Muslim Mission Alliance explained how they are working together to bring Christ to Muslims and other non-Christians in Afghanistan, Bangladesh, India and Pakistan.  That alliance is composed of 11 groups, including LCMS World Mission, Orphan Grain Train, the Michigan District, Wheat Ridge Ministries and People of the Book Lutheran Outreach (POBLO).

Representing POBLO, a Muslim-outreach society based in Dearborn Heights, Mich., Javed Khan said the organization has expanded from two U.S.-based missionaries in 1993 to 29 missionaries in five countries today.  POBLO plans to have 300 missionaries in service by 2006, and 900 by 2009, Khan said, and he provided updates on the numerous health and educational ministries the alliance has started in western Asia with the assistance of its partners.

In his presentation on the importance of strategic planning, Dr. Allan Buckman, LCMS World Mission facilitator, said successful mission alliances focus on defining the ministry; identifying partners; determining the roles and responsibilities of the board of directors, donors and staff; and deciding which leadership style to use.

In the case of the Muslim Mission Alliance, “the whole thing began with a concern for the lost,” Buckman said, followed by study, research and dialogue with others who had experience in working with Muslims, and, finally, a decision on the part of LCMS World Mission to delegate church planting and leadership development to POBLO.

For the first time, the Synod’s mission board had to “redefine its role,” Buckman said, shifting its responsibility to strategic planning and facilitating interested groups.  The alliance, he said, represents “a new way to do more mission work in The Lutheran Church-Missouri Synod.”

In his presentation on “mission connections,” Rev. Norbert Oesch, executive leader of the Pastoral Leadership Institute, said “mission work is all about connections,” and he described mission as “connecting people to Jesus.”

“When people are connected with a common mission and a common vision, almost anything is possible,” he said.

Allen D. Hanson, director of the Concordia, Mo.-based Lutheran Prison Ministry, said he appreciates getting together with other mission-society workers through the ALMA network.

“Experienced people work in key areas,” Hanson said, so there’s always someone who’s “been there, done that,” that you can call on for advice.  “This is what gives the organization its strength,” he said.

During a business session, Ron Scherch of CAN-DO Missions Inc., was elected to his first term as second vice president, and Todd Reineck of Lone Star Bible Outreach, was re-elected as treasurer.

For more information about ALMA, visit its Web site at http://www.alma-online.org/.