Trinity Lutheran Church, Litchfield Park, Ariz., is thought to be the first congregation to sponsor a “One Mission Ablaze: Igniting Congregations” event March 13.

“This is the first cong 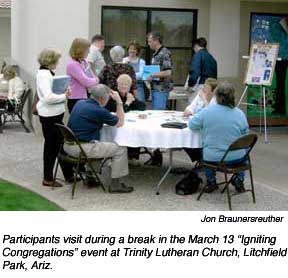 regation-sponsored ‘Igniting’ event that we are aware of,” said Rev. Larry Krueger, an assistant to Synod President Gerald Kieschnick.  “And from what we’ve heard,” he said, “Trinity, Litchfield Park, has done exactly what other congregations that want to sponsor a similar event could model.”

Rev. David Bolte, pastor of the Phoenix-area congregation, was among those representing 23 congregations who gathered in Omaha Nov. 14-15 for the third national “Igniting” event sponsored by Kieschnick’s office. They talked about how to increase worship attendance — an area in which they all had dramatic success in a five-year period.

“As a result of that,” Bolte said in his invitation to Trinity’s event, we were encouraged by [Kieschnick] to share what we are doing with other congregations.”

“God is good, and we wanted to share God’s goodness,” Bolte added.

So on March 13, Trinity hosted a regional “Igniting Congregations” event for 60 leaders of other Arizona congregations.  Bolte and other staff members from Trinity shared what he refers to as “the top 10 reasons” why Trinity is growing.  They also led round-table discussions about increasing worship attendance and answered questions from the group.

Bolte said that Trinity’s top-10 list of reasons for growth “has been worked, reworked, tweaked, reviewed and critiqued by the staff, the elders and the Board of Directors of our congregation.”

Those 10 reasons, as Bolte lists them, are “God’s goodness and grace, an environment of grace, cultivating mission mindedness, maximizing our location, rapidly responsive, intentionally proactive, variety in ministry, education emphasis, strive for excellence, [and] peace and unity.”

Rev. Augie Iadicicco, pastor of Saving Grace Lutheran Church, a one-year-old congregation in nearby Queen Creek, told Reporter he attended the event at Trinity because “they have constructed a ministry that seems to model the kind of ministry we’d like to emulate.”

Trinity “is a local church that has grown within a similar demographic,” he said. “Learning from a fast-growing church in the Midwest wouldn’t be as directly applicable to the way Phoenix urban sprawl affects a local LCMS church in similar settings.”

Iadicicco said that two of the top 10 reasons for Trinity’s growth “that spoke loudest to me” were “an environment of grace” and “rapidly responsive.”

“As Lutherans, we should understand grace more than anyone,” Iadicicco said, “but often our churches are not places where grace is actually experienced.”

“The church should be different than the world, in that it is visibly a place where we love, forgive and enjoy the freedom and joy God has gifted us with,” Iadicicco said.

“They have a culture that will honor no ruts,” Iadicicco said of Trinity and its “rapidly responsive” reason for growth.

“If something needs to change, they don’t hesitate to change it so that more people can be reached,” he said.

“Trinity is about five or six years ahead of where we are right now in terms of ministry,” said Rev. Kevin Wilson, pastor of Word of Life Lutheran Church in Surprise, Ariz., a two-year-old congregation that had 12 congregational leaders at the Litchfield Park event.

Wilson said that at least nine of those who were there will return to Trinity with others to “witness first-hand how they do what they do.

“Our bottom line is that we’d like to avoid reinventing the wheel,” Wilson told Reporter.

He said that his congregation is “most interested” in learning how Trinity “juggles” four services, Bible classes and Sunday school every Sunday morning; how it conducts a Wednesday evening all-ages Bible study and fellowship; and get ideas for implementing Word of Life’s master plan for starting a Lutheran school.

“They want to help us succeed,” Wilson said of Trinity’s staff and members.

The event at Trinity was cost-free, including lunch and childcare.

To learn more about Trinity Lutheran Church, Litchfield Park, go to its Web site at www.trinity-lutheran.net.