In recent years, national convocations have been planned as annual events, although they were ever 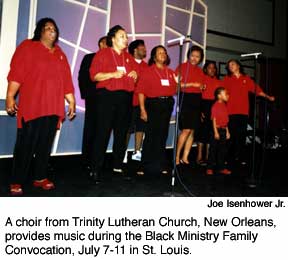 y other year when first held in the late 1970s.  Also, this year’s convocation called for regional convocations in alternate years “to enable the national staff to promote their programs to the people at the grass-roots level.”

The resolution passed in the delegate assembly notes that convocations were created “to try to re-establish the bond of fellowship and to enable some form of common projects that the body might pursue [and] to give Black ministry a voice, if only advisory, in the decision-making processes that affect this work.”

“This makes it substantially easier for the Board [for Black Ministry Services] to be a program board,” Dr. Phillip Campbell, the board’s interim executive director, told delegates just after their vote to go to a two-year cycle.

A separate resolution named Concordia College, Selma, Ala., as the site for the 2006 convocation.

Convocation delegates defeated a resolution to “minimize the cost of the Black Ministry Family Convocation,” citing their action to move to a two-year cycle as a cost saver.

William Edelman of Concord, N.C., spoke against the resolution, saying, “It’s going to be much more pleasing to the Lord to do things first-rate.  The spiritual benefits far outweigh any that might be financial.”

Edelman added that he and his wife, Cherelle, were at the convocation with eight of their 10 children, who were involved in the youth program.

In other action, convocation delegates:

Campbell said this year’s convocation “got really high marks” from evaluation forms that many of its 715-some participants submitted at the end of the event.

As with past convocations, this one, under the theme “King of Kings,” included a youth component as well as sessions for adults.  The youth program drew 220 participants.  Adults and youth had their own worship services and workshops. Fellowship activities included the convocation banquet, and the young participants had a day at Six Flags, west of St. Louis.

“It’s cool to involve kids,” said Jerrell Sims, 14, who participated in his first convocation youth program.  “We’re having fun, but we learn a lot too,” said Sims, who was part of a group of 16 young people and four adults from Toledo, Ohio.  “I hope I get to come to another one,” he said.

Dr. Cheryl E. Williams — also at her first convocation — said that convocation workshops and conversations with other participants gave her “a lot of good examples and ideas of what other churches are doing to reach out to African Americans and others.”

Williams is an assistant professor of business and assistant to the president for international and cultural relations at Concordia University, Irvine, Calif.

A member of Christ Lutheran Church, Costa Mesa, Calif., she said she was convinced that much of what she was hearing about outreach could be adapted to other minorities, such as Hispanics who live in southern California.

Williams said she “especially appreciated” a convocation workshop about building communities of faith and housing partnerships, presented by representatives of Fannie Mae.

Describing Fannie Mae as “a private company that works with lenders to make sure that mortgage money is available for communities all across America,” the workshop leaders discussed and answered questions about the company’s faith-based initiative that works with faith groups to increase minority home ownership.

This was one of several convocations that Larenza and Naomi Mungin of Jacksonville, Fla., have attended.

“It’s good to be able to take a few days and immerse ourselves in worship and fellowship,” said Naomi, who added that daily convocation worship services were the highlight for her.

“And it keeps us informed of what’s going on in Black ministry in our church,” said her husband, Larenza.