The Commission on Theology and Church Relations (CTCR) is recommending that this summer’s Synod convention declare the Synod to be in altar and pulpit fellowship with the Evangelical Lutheran Church in Kenya.

The resolution of support for fellowship with the East African church body was adopted unanimously by the commission at its Feb. 16-18 meet 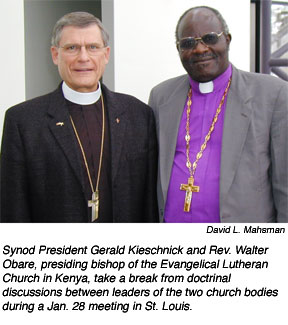 ing in St. Louis.  A report from discussions between the two church bodies says that doctrinal agreement exists between them.

“The Lutheran Church–Missouri Synod is truly thankful to God for the clear confession of faith given by our brothers and sisters in Christ of the Evangelical Lutheran Church in Kenya,” LCMS President Gerald Kieschnick said following two days of meetings with ELCK representatives Jan. 27 and 28.  “The ELCK and the LCMS, while existing in countries vastly different from one another, are remarkably alike in our understanding of the life-transforming activity of the Triune God through Word and Sacrament.”

“By God’s grace, we expect that together we will strengthen and stand one with the other on the faith we are called to witness to within our respective church bodies and hence also within world Christendom,” ELCK Presiding Bishop Walter Obare said after the January meeting.  Obare led a three-member ELCK delegation to that meeting.

The ELCK has some 70,000 members in 440 congregations, which are served by 110 pastors and 185 trained evangelists who work under the pastors’ supervision.

Synod Bylaws require the CTCR’s approval before a Synod convention considers recognition of altar and pulpit fellowship with another church body.

Kieschnick: 'Critical event' is key to increases in adult confirmations