“You can be proud of your kids.  They’re living out their faith.”

That’s the message that “always comes back,” said Rev. Terry Dittmer as he talked about the 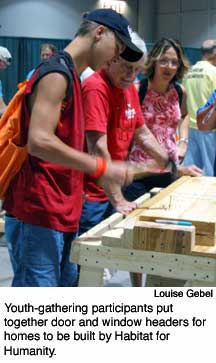 Dittmer is director of youth ministry with LCMS District and Congregational Services. Youth ministry has been the sponsor of nine such gatherings since 1980.

“These gatherings maintain youth ministry in The Lutheran Church–Missouri Synod,” he said.

In Orlando, 33,651 young people and their adult leaders converged on the Orange County Convention Center, covering 1.6 million square feet of space — the biggest event yet in one of the country’s largest convention centers.

The final registration figure of 33,651 is a record for the nine Synod gatherings.

“Family groups” that averaged six youth to two adult leaders arrived in Orlando by various modes of transportation.  Two brothers from Palmer, Alaska — Nathan and David Bower — even pedaled a tandem bike some 4,000 miles across Canada and the United States, arriving in Orlando in time for the July 22-24 diversity event that preceded the gathering.

Participants came from 2,126 congregations — about a third of all those in the Synod.

They gathered in a mammoth “room” at the convention center every morning for Bible study and at night for mass events that included a serial drama, Christian music from bands like 2004 Grammy-winning Audio Adrenaline, for speakers and for Tuesday-night worship.

The gathering’s theme was “Beyond Imagination” — based on Eph.  3:20-21 and a reflection on “imagineering,” the term often used in connection with special effects at the many theme parks around Orlando.

“After a while, I’m going to forget about the theme park,” a 15-year-old boy from California told Reporter after his group visited one of them, “but I won’t forget about this gathering.”

About 9,000 youth and adults spread over the Orlando area for servant events at more than 80 sites.

Gretchen Jameson, associate director for youth ministry — communications, said there were more than 40,000 “opportunities for gathering participants to serve.”

Those included bringing thousands of Bibles from home for outreach ministries, hundreds of pints of blood donated at a blood bank in the convention center, and countless bags and boxes of food dropped off for distribution through an Orlando food bank.

Gathering participants hammered together window and door headers for Habitat for Humanity homes.

At the Tuesday night communion service, they gave more than $190,000 for the Synod’s Ablaze! initiative, youth-leadership development and for projects of the LCMS Florida-Georgia District.

In the service, actors portrayed the Gospel lesson in scenes from the events of Holy Week and Easter. Several hundred youth formed a choir, wind symphony and liturgical-dance troupe for the service.

Synod President Gerald Kieschnick echoed the gathering theme in his sermon that night.

“The fact that Jesus suffered, died and is alive again for you and me and all the people of the world is beyond imagination,” he said.

As his sermon ended, Kieschnick led the assembly repeating, “Jesus is alive,” from whispers to shouting it.

“I’m sure that for some of you, it’s beyond imagination that you are here,” said Kieschnick’s wife, Terry, after he introduced her and two of their grandchildren to the gathering.  “God chose each of you to be here at this gathering.”

Dittmer said that food-service workers and a number of workers in some of the 27 hotels that housed gathering participants commented on the youth participants’ good behavior and courtesy.

He said that was “just one of many ways” participants “connect their faith and life.”

“I do think it has something to do with the quality of families in our church body,” said Dittmer.  “We have tremendous support from families in the churches that send kids to the gathering — they support youth programs.

“They’re not the same as adult gatherings in our church,” he said of youth gatherings, quipping that the average participant invests between $1,000-$1,200 to be there, “to walk away with a [free] Bible and a backpack.”

In late August, enough copies of a 32-page, full-color first-time-ever memory book titled MORE 04 are set to go into the mail “to help everyone at the 2004 gathering recall its iconic images as they tell others about their experience and faith,” Jameson said.

Although formal evaluations of this gathering won’t be reported until October, Jameson said she has received hundreds of e-mails from the gathering Web site “expressing gratitude — about the city, the convention center, the gathering program.  They’ve all been very affirming.”

Planning for the next gathering — July 27-Aug. 1, 2007 — actually started in the summer of 2003 with selection of New Orleans as its site.  Meetings of gathering committees are scheduled within the next several months.