One hurricane is bad enough, but several in a row have created widespread devastation in Florida that is “just absolutely mind-boggling,” according to Lutheran Services Florida spokesman Zack Koczanski.

“This is a very, very large cris 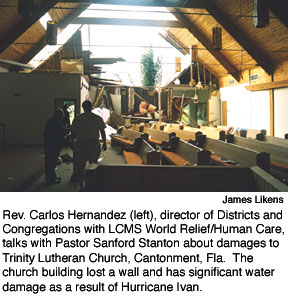 is here,” Koczanski said.  “The need for dollars is going to be significant.”

Back-to-back hurricanes Charley, Frances, Ivan and Jeanne, which hit Florida coastlines Aug. 13, Sept. 5, Sept. 16, and Sept. 25, respectively, have killed more than 100 people in this country and caused billions of dollars in damages in Florida and other states, including Alabama, Georgia, Ohio, Pennsylvania, and North and South Carolina.

Hurricane Ivan and the dozens of tornadoes it spawned in this country ripped off roofs, shattered windows and tossed cars and mobile homes.  Torrential rains and flooding ruined carpets, furniture and other household items, now piled high on curbsides.

One Ivan-related death of an LCMS member was reported in the Southern District.  Elizabeth “Liz” Cowan, 30, a lifelong member of Trinity Lutheran Church in Mobile, Ala., was killed in a car accident Sept. 17 on Interstate 65 near Greenville, Ala.  She and her family were returning home from Birmingham, where they had gone to escape the storm.  Cowan’s 4-year-old son, parents and aunt, passengers in the SUV she was driving, were injured.

As this Reporter went to press, the Synod’s Florida-Georgia District had heard from most of its congregations in Hurricane Jeanne’s path, but is “still working on” reaching others without power.

More than 20 of the district’s churches experienced loss of electricity, and at least nine have reported some roof and water damage, according to initial reports.  Several were battered first by Frances, then by Ivan, according to Florida-Georgia District President Gerhard Michael Jr.

“Where there was damage with Frances, in most cases, it’s worse” now, Michael said.

Hit early-on by Charley and Frances, the Synod’s Florida-Georgia District has developed a five-pronged response to its professional workers that includes preaching assistance and other pastoral care, respite opportunities, debriefing for church staff, counseling, and financial support for those with damages.

A number of other LCMS churches, mostly in the Pensacola, Fla., area, sustained Hurricane Ivan damages, some “substantial,” according to LCMS Southern District President Kurt Schultz.

“Pensacola is kind of a war zone,” Schultz told Reporter.  “In fact, one soldier who came home from Iraq said he had not seen that kind of damage in Iraq.”

Schultz said it was a “miracle” that more lives weren’t lost in the deadly hurricanes.

Rev. Stephen Linck, pastor of Grace Lutheran Church in Pensacola, and his family chose to “ride out” the storm.

“We had a number of people who could not or would not leave,” Linck said.  “I felt it was important that a shepherd stay with his sheep.”  Even as Ivan was approaching and winds were picking up, Linck and his DCE intern, Sam Beltz, were boarding up the windows for a family in the congregation.

More than a third of the roof of Linck’s church was ripped off by Ivan, and water soaked most everything in the church.  The hurricane also uprooted a number of large trees, including two 100-year-old oaks, on the Grace property.

“Grace Lutheran Church might be missing many parts this day, but it is truly alive, for we have the Spirit of life in our midst,” said Linck, leading a worship service Sept. 19 in the church parking lot.  Grace members now are worshiping at an Episcopal church two miles away until their church is repaired.  Linck estimated damages at “at least $850,000,” and said the church is well-insured.

Other Southern District churches hit by Ivan include:

Hurricanes also damaged the homes of numerous LCMS families, putting a strain on Synod pastors who are responding to requests for help, according to Rev. Carlos Hernandez, director of Districts and Congregations with LCMS World  Relief and Human Care.

“All of the pastors in Pensacola are ‘hands-on’ involved in the cleanup, as well as caring for their people spiritually,” said Hernandez, who visited Southern District congregations following Ivan to determine the needs of hurricane victims and offer support.  Many pastors already are fatigued, he said, so counseling and respite care for clergy is being coordinated through the district and Lutheran Services Florida.