Kieschnick: 'Critical event' is key to increases in adult confirmations

SAN ANTONIO — “Multiplying the critical event” is the key to increasing the number of adult confirmations, Synod President Gerald Kieschnick told those at a “One Mission Ablaze: Igniting Congregations” event Feb. 13-14. 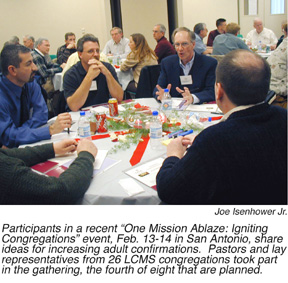 Kieschnick defined the critical event as “when one Lutheran Christian gives witness about Jesus of the hope that is within him or her to another person so that person may encounter Christ.”

“Igniting Congregations” events are part of Kieschnick’s initiative to “move [the Synod] forward as a dynamic church body that will reach many people for Christ.”

The 26 congregations were among those who reported the largest number of adult confirmations over the five-year period beginning with 1999.

During the event here, they shared stories about what their congregations do to foster adult confirmations and adopted a project for which they will become mentors for other congregations in their areas of the Synod.

“I know you would be among the first to say, `We’re just doing what the Lord calls us to do,'” Kieschnick said as he encouraged the participants to share ideas about gains in adult confirmations.

St. Paul Lutheran Church, Boca Raton, Fla., has added an average of 50-plus members per year through adult confirmation over the past 14 years, said Dr. Dennis Glick, the congregation’s pastor.

“We practice intentional outreach with one-on-one visits with visitors and the unchurched parents of children in our congregation’s school,” said Glick, who indicated that the congregation has a part-time minister of outreach.

Glick said that the congregation “puts a lot of emphasis on adult education.  The church grows when the people grow, and the people grow when they’re into the Word.”

“We have always looked for opportunities to share the Gospel with people who are unchurched,” said Rev. Ralph Blomenberg, pastor of Immanuel Lutheran Church, Seymour, Ind. The congregation gained 159 members through adult confirmation in the five-year period.

“I think we will be even more intentional about that as a result of this Igniting event,” said Blomenberg.  “We spent a couple of days in San Antonio thinking of nothing else, and that has given me a chance to evaluate what our congregation has done well with regard to outreach, including to adults, and what we can do better.”

Dr. Kevin Wyssmann, senior pastor of Christ’s Greenfield Lutheran Church, Gilbert, Ariz., said that the congregation has taken a number of steps toward outreach to adults over the past 12 years.

Wyssmann said that the congregation has added a secretarial staff person to “specifically track guests,” and its board of evangelism set up a three-phase plan to respond to visitors. He said that visitors interested in becoming members (including transfers) are expected to take a 10-week “Basic Training” course that he says is “geared toward adults who have little or no faith background.” And, “extensive new-member orientations and assimilation efforts have been developed,” he said.

Christ’s Greenfield, in a suburb of Phoenix, added 342 new members through adult confirmation for the five years beginning with 1999.

The project that San Antonio participants adopted will duplicate their “Igniting” event for other congregations in regional gatherings across the country.  It will be funded with a $52,000 grant from Thrivent Financial for Lutherans.

The last four “Igniting Congregations” events are scheduled to begin this fall.