“It is time for The Lutheran Church–Missouri Synod to turn the world upside down for Jesus,” Synod Pre 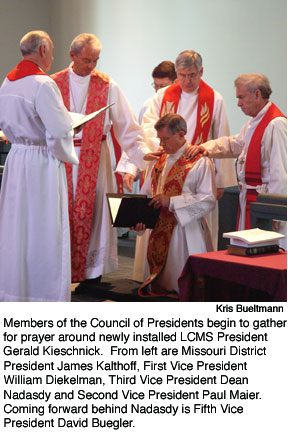 sident Gerald Kieschnick told Synod leaders — board and commission members and executive staff — shortly after many of them had been installed into office Sept. 18.

Kieschnick delivered his installation-day speech after a noon luncheon that included the newly elected, re-elected or appointed Synod officers and members of 16 boards and commissions.

The installation for the 93 leaders who are beginning new terms of office had taken place that morning in a matins service at the Chapel of St. Timothy and St. Titus on the campus of Concordia Seminary, St. Louis.

“Here’s my pledge to you, the leaders of our church,” Kieschnick said.  “I am going to look for ways to encourage, to inspire the people and congregations of our Synod to be ablaze for the mission.  I am going to look for ways and resources to open up new mission outposts on the frontier of 21st-century America.  And I am going to continue to encourage the critical-event — one Lutheran Christian sharing the Good News with someone who does not know Jesus Christ.

Kieschnick has been using the term “critical event” to refer to one-on-one evangelistic outreach.

“The critical event happens when a faith-filled believer, his or her heart set ablaze by God’s Holy Spirit, tells another person of the wonderful forgiveness and life that God offers in Jesus Christ,” Kieschnick said in his speech.  “It happens when a Christian tells a non-Christian or a lapsed Christian or a backsliding Christian that God came in the flesh to live and die for him that he or she might be forgiven and have eternal life.

“In the early years of the church, in larger and larger concentric circles reaching out from Jerusalem, the critical event repeated itself time and time again,” he continued. “Its aggregate effect would be nothing less than to turn the world upside down — to challenge the beliefs, practices and values of the culture of the day.”

Kieschnick said that today’s church faces a similar frontier, one marked by a war on Islamic terrorism around the world and “culture wars” at home in the United States.

“This is our new frontier: an historically Christian nation that is fast losing its Christian moorings — a confused nation in which many people say that Christianity is merely one ethical proposition among many, and that Jesus Christ may be a savior but not the Savior,” Kieschnick said.

“It may be harsh and politically incorrect to say this, but say it we must: Those who don’t come to faith in Jesus Christ and embrace Him as their Savior and Redeemer are on their way to eternal destruction.  They are headed for the blackness of eternal night. Those aren’t my words, but the words of Jesus Himself.

“I don’t want to see that happen to one single solitary person, do you?” Kieschnick asked his audience.

The president acknowledged that there are “certain areas of disharmony and tension” in the Synod.

“I want to work together with you as leaders of our Synod to change the all-too-often vitriolic nature of our synodical culture that frequently rears its downright ugly head in our midst,” Kieschnick said, adding that he believes any differences can be brought to a God-pleasing resolution.

“I believe we can do this while working toward the same vision: being God’s instruments in leading more souls to Christ,” he said.

To reach more people with the Gospel will take more pastors, teachers and resources, Kieschnick said.  “But most of all, it will take LCMS leaders and members like you  ablaze with the desire to share the Good News with others.”

He also said it will take “more and more congregations not content with the status quo within their own walls but rather burning with desire to plant new churches in their communities.

“Whether we like to hear it or not, research shows that planting new churches — establishing new mission outposts — rather than inviting people to come into older, existing ones, is the best way of attracting new people to the church,” he said.

Kieschnick encouraged every Synod congregation either to establish or help another congregation to establish one new “mission outpost.”  He noted that one “national goal” adopted by this year’s Synod convention for the Ablaze! initiative is to start 2,000 new congregations by 2017, the 500th anniversary of the Lutheran Reformation.

“Brothers and sisters in Christ, that Christ Jesus, our Lord and Savior, is calling,” he said.  He received a standing ovation as he concluded, “Evangelically, faithfully, with great conviction and singleness of purpose, I invite you: Will you follow Him with me?”