In the face of fewer projects and fewer available workers, Laborers For Christ (LFC) is offering additional services to make its program more useful and “relevant” to today’s changing congregations.

The Synod’s LFC program, which began in the Rocky Mountain 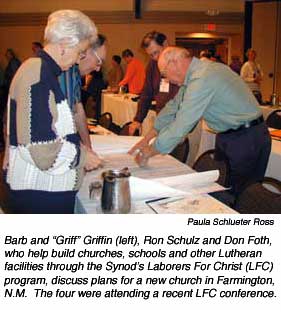 District but has operated nationally since 1985, uses volunteers — mostly retired Lutherans — to help congregations and others build and remodel churches, schools and other structures at cost savings.

The program moved in July from LCMS World Mission to the Lutheran Church Extension Fund.

Curt Connolly, who directs the LFC program, says the group has completed 661 projects to date — about 8 percent of the buildings used by LCMS congregations and institutions.

Connolly says he believes the decrease in the number of LFC projects — and workers — isn’t due simply to the poor economy.  While that may play a minor role, he points to what he calls “challenges and generational changes” — basically, the ways in which congregations and retirees have changed over the years.

Those challenges and changes, which Connolly shared during a meeting of LFC project managers March 2-4 in St. Louis, have made Laborers For Christ “irrelevant”
to many of today’s congregations, he said.

For example, many of today’s “baby boom” congregational leaders are too busy to give their time to an LFC project.  They would rather give money than time, Connolly says, which creates difficulties since congregations are required to provide volunteers to assist Laborers on projects.

Moreover, those who choose to serve as Laborers with LFC are less flexible about when they can serve, according to Connolly, and are more committed to their own retirement plans than the needs of the organization.  Whereas Laborers in the past have worked on several projects a year, making their LFC service a priority, many younger Laborers view LFC as only one of a number of activities, he said.  So their service to LFC is very limited.

At the same time, the size and complexity of LFC projects has increased, requiring a longer commitment of time from Laborers and members of the congregations they are serving.  Likewise, meeting government regulations pertaining to land use, building requirements and the environment has become more time-consuming, Connolly says, and often causes delays.

As a result, he says, Laborers For Christ is trying to “reinvent itself” to become more “user-friendly” to today’s congregations, providing the services that they really want.

For example, some congregations that are unable to secure enough volunteers have asked if LFC project managers are available to work with local subcontractors — instead of an LFC crew and volunteers from the congregation.  So that service is now being offered on a trial basis.

Also new are short-term maintenance and renovation projects, which involve a small LFC crew that stays on site for three to four weeks — rather than the three to six months required for a large-scale construction project — painting, installing windows and doors, or whatever needs to be done.

Another service, one that Connolly hopes will be offered on a trial basis by 2005, would be to provide an LFC coordinator who would work with the congregation from start to finish, providing advice on aspects such as building design, raising money and securing loans — duties that now fall to congregations alone, he said.

Said Connolly: “Our objective is to become a more flexible and usable resource for congregations that will enable them to build the facilities they need.”