LCMS is about seeking and saving, Kieschnick tells opening worship

ST. LOUIS – Through a series of short stories, Dr. Gerald B. Kieschnick, president of The Lutheran Church–Missouri Synod, called on members to seek those who are lost and “save them.”

Kieschnick, delivering the sermon at the July 11 opening service of the 62nd LCMS Regular Convention at America’s Center, said “seeking and saving” is a key component of the Convention’s theme, “One Mission – Ablaze!”  “Ablaze!” is an effort to share the Gospel with 100 million people worldwide by 2017, the 500th anniversary of the Protestant Reformation.

In his 30-minute sermon, Kieschnick used examples of LCMS members who helped neighbors and strangers meet physical needs as well as find church homes.  He told the story of a yo 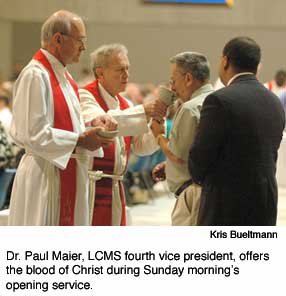 ung boy, unwanted most of his life before he died at age 17. Kieschnick also talked about the sacrifices of LCMS missionaries who began work in Nigeria 65 years ago, the beginnings of the Lutheran Church of Nigeria, with “tens of thousands of members” today.

In Is. 49:5-6, the light of God’s love was extended to the Gentiles, Kieschnick said.  He said Israel’s allegiance to God rose and fell with the faithfulness and unfaithfulness of a succession of Israelite kings, producing a nation in exile from God and country, constantly in need of being called back to the truth.

“Today, centuries later, we in the LCMS have the multi-faceted responsibility of nurturing those already in the Christian faith and of calling back, restoring and reclaiming those who have fallen away from the truth,” Kieschnick said.

Quoting C.F.W. Walther, the first LCMS president, Kieschnick reminded the congregation that all Christians are missionaries, obligated to “watch, care and help [so] that others may also be enlightened and brought to Christ.”

“Walther must surely be talking about both the mission of finding those who once were found and are now again lost, and also the mission of Christian outreach to unbelievers, lost people who have been found and who do not now confess the name of Jesus,” Kieschnick said.  He added that believers also are “in need of His righteousness and salvation.”

More than 4 billion people – three of every four people in the world today – “do not know or believe in Christ as their Savior from sin,” Kieschnick said.

“We believe, teach and confess that without saving faith in Christ in their hearts, these people will not be saved eternally,” he said.  “That’s a hard teaching, but it’s a true teaching.  Our mission is to move this precious Gospel beyond ourselves into the lives of these 4 billion people.”

In the United States, the population has increased by more than 80 million people in the past 30 years, and yet, the Synod has lost more members than it has gained in that period, Kieschnick said.  Many Christian church bodies are declining in numbers while the Mormons (Church of Jesus Christ of Latter-Day Saints) and Muslims are growing in numbers, he added.  He cited cultural influences and human frailties, such as laziness and focus on self, as possible reasons for failure to spread the Gospel to non-believers.

“For all these reasons and more, as I’ve thought about and prayed about ‘Ablaze!‘ I have considered the possibility that, from a purely human perspective, such an endeavor might not succeed, especially if it depends solely upon people like you and me,” Kieschnick said.

“When we recognize the enormity of the tasks that are before us that God has given us, we must also recognize from the truth of God’s Word that He has been at work preparing His people, including you and me, to accomplish that mission,” he said.  “Our preparation for accomplishing this mission began when God formed us to be His servants and put His mark upon us through Holy Baptism.”

Kieschnick warned that without God’s presence, “We would ruin whatever we touch, bringing it all to destruction.