BROOKLYN, N.Y. — As the last few buyers of 2,900 low-cost homes prepared for their closings, LCMS church and lay leaders celebrated the completion of the “Nehemiah” community here May 27 and the beginning of “a national crusade” to support affordable housing.

“This is a very significant day, both to recall and learn and also to turn a corner for t 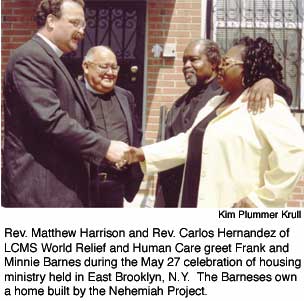 he LCMS in housing,” said Rev. Matthew Harrison, executive director of LCMS World Relief and Human Care, which hosted the event in honor of Nehemiah’s success.

In the early 1980s, the Synod was the first to commit financially to the church-based housing program. That $1 million investment has been called “pivotal” to an effort that, over the years, has transformed devastated neighborhoods and turned low-income working families into first-time home-owners.

Among those on hand for the celebration were members of St. Peter and Risen Christ Lutheran Churches, two LCMS congregations that refused to abandon once crime-infested neighborhoods and became leaders in the East Brooklyn Congregations (EBC), the multi-denominational association of churches that founded the Nehemiah Plan.

The plan was named for the Old Testament prophet who led the rebuilding of Jerusalem.  Since the first Nehemiah development, others have followed in cites like Memphis, Chicago and Boston.

“We got involved when we saw how the community was affecting our people,” said Dr. David Benke, LCMS Atlantic District president and St. Peter’s pastor. “We decided this wasn’t just about housing; it was about missions and keeping our churches in neighborhoods where they are desperately needed.”

The decision by former Synod leaders to invest in what was then considered a radical plan for community restoration was “pivotal to building support for an effort that has had an extraordinary impact,” said Mike Gecan, the first EBC lead organizer.

Benke announced during the celebration that the Atlantic District and LCMS World Relief and Human Care are partnering to make possible a $1 million loan to the EBC for a new Nehemiah development, 843 low-cost homes to be built at a former landfill site in Brooklyn.

The district will borrow the money from the Lutheran Church Extension Fund (LCEF), and World Relief and Human Care will match the district’s commitment to pay interest for what is expected to be a five-year loan.

“History is repeating itself,” said Gecan, who added that, once again, the Missouri Synod is the first to financially commit to a new Nehemiah effort.

Gecan presented $365,000 to World Relief and Human Care, as partial return on a second $1 million commitment the Synod made in the 1990s.  A total of nearly $1.2 million is expected to be returned by the EBC to the Synod this year.

Harrison said that, through the new corporation, LCMS World Relief and Human Care is “beginning a national crusade to bring resources to bear, to help our parishes and our districts step into their role as good corporate citizens ….”

The May 27 celebration included a tour of Nehemiah neighborhoods.

“This place used to be nothing but abandoned buildings and trouble,” said Minnie Barnes, who, with her husband, Frank, members of Risen Christ, were involved in community-organizing efforts for Nehemiah and bought their first home in a Nehemiah neighborhood 20 years ago.

“It was hard to move here at first,” she said, “but it was a blessing, too. The opportunity to own our own home was a godsend.”

For more information about the LCMS National Housing Support Corporation or for a booklet with information on a Lutheran theological approach to housing issues, contact LCMS World Relief and Human Care at (800) 248-1930, Ext. 1380 or 1381; lcms.worldrelief@lcms.org.

Kim Plummer Krull is a freelance writer in St. Louis who writes for LCMS World Relief and Human Care.