ST. LOUIS — LCMS World Mission took advantage of the Synod’s 62nd Regular Convention to host several pre-convention events to mark the success of one bold initiative and the ambitious start of another.

Hundreds of current and former missionaries, some two dozen leaders of LCMS partner churches overseas and hundreds more Lutherans interested in cross-cultural ministries in the United States met with the Synod’s national mission leaders in St. Louis to praise God and learn from one another.

Two first-ever missionary events were designed to introduce and promote Ablaze!, LCMS World Mission’s initiative to share the Gospel with 100 million people worldwide by 2017, the 500th anniversary of the Reformation. 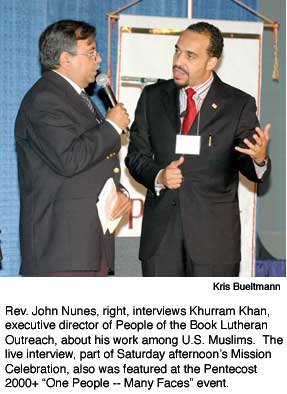 The “One Mission Ablaze! — Lighting the Flame Summit … Around the World,” June 28-July 2, brought together dozens of “career” missionaries and their families for spiritual nurture, study and fellowship.  A second gathering, July 9-11, involved hundreds of former missionaries.

Rev. John Mehl, the mission board’s regional director for Eurasia, said the meetings were well received.  Many of the current missionaries — even some serving the same regions — had never met, he said, and the discussions were helpful in creating cohesiveness among them.

“If anything, we’ve been focused so sharply on the work that we do [individually] that we have failed to see that we’re one mission,” Mehl said.

Another “first” for the Synod was the “Ablaze! International Summit,” a July 7-9 meeting of 28 presidents and bishops — or their representatives — of overseas partner churches with the Synod’s national mission leaders.  That event, too, focused on worldwide outreach and included studies of “what works” and strategic planning for future endeavors.

Archbishop Janis Vanags, who heads the Evangelical Lutheran Church of Latvia, said the gathering of international Lutheran leaders was “a very decisive and concrete step” toward working more closely together in Gospel outreach worldwide.

For 50 years under Communist rule, the Lutheran church in Latvia “struggled only to survive,” losing about 80 percent of its clergy, he said.  “I think it’s very important we see mission as the response to different problems in today’s world, and mission as a way to strive for healing in the world,” Vanags said.

Two larger events were held to celebrate “Pentecost 2000/Pentecost 2000+,” or “P2K,” the mission board’s initiative to start 1,000 cross-cultural ministries in the United States that is coming to a close at the Synod convention, and to officially launch Ablaze!, the board’s new, 13-year Gospel-sharing campaign that runs through Oct. 31, 2017.

“One People — Many Faces,” July 9-10, celebrated the success of P2K, which led to the start of 1,011 new ministries, and included videotaped and live testimonies from Lutherans involved in African immigrant, Asian, Muslim and other non-white ministri