Rev. Daniel Preus says that he believes some resolutions adopted by this year’s Synod convention “re 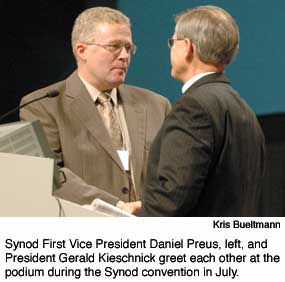 present a serious change from our historic LCMS polity, others a disenfranchising of God’s people in the matter of their right to judge their shepherds and still others, direct attacks upon the Word of God.”

But, he is urging those who agree with him not to do anything rash.

The outgoing Synod first vice president made his comments in an e-mailed letter dated Aug. 1 to those who are “discouraged” by events at this year’s Synod convention.  The letter was distributed via an e-mail list, “Crisis Update,” maintained by Wyoming pastor Rev. Marcus Zill of Laramie.

“Let’s not be rash.  Let’s not be impetuous,” Preus said in the letter.  “Let’s not make quick decisions that we may later regret.”

Asked why he wrote the letter, Preus told Reporter, “My primary intention was simply to calm people down.”  He said that he had heard some congregations talk about leaving the Missouri Synod for another church body or to form a new synod.

“When people become upset, they often act in impetuous ways,” Preus added.  But, he asked, what is accomplished by forming a new “14-member synod”?

Because he was a candidate, Preus wrote in his e-mailed letter, he would not comment on the election.  “In my opinion, far more significant than what happened in the election process was what the assembly did in adopting certain resolutions,” he wrote.

In an Aug. 13 interview with Reporter, Preus cited two resolutions adopted by the convention — both related to ecclesiastical supervision — that he says were “wrong” and even “unbiblical”:

“Life under the cross means we frequently have troubles,” Preus told Reporter.  “Sometimes a church convention can make mistakes.  The solution is not to take immediate and rash action, but to attempt to correct any mistakes.”

How does he propose to do that?  For one, there’s the Synod’s process for expressing dissent.

“The dissent process is open to us and we have every right to pursue it where we believe the Synod has erred,” Preus said.

The bylaw (2.39 c) governing dissent says:  “While retaining the right of brotherly dissent, members of the Synod are expected as part of the life together within the synodical fellowship to honor and to uphold the resolutions of the Synod.  If such resolutions are of a doctrinal nature, dissent is to be expressed first within the fellowship of peers, then brought to the attention of the Commission on Theology and Church Relations before finding expression as an overture to the convention calling for revision or recision.  While the conscience of the dissenter shall be respected, the consciences of others, as well as the collective will of the Synod, shall also be respected.”

In his letter, Preus also wrote, “I do believe that it is a time to discuss how we can go forward with clear consciences in the face of error in our own fellowship.  I also believe that it is time for us to speak the truth in love and to speak it clearly in order to protect our church body from those who would lead it into unfamiliar and un-Lutheran ways.  It is time for us to discuss how this can best be done, and I am confident that the opportunities to hold such discussions will come soon.”

Preus told Reporter that he didn’t mean by his statement to identify anyone in particular, but to describe the situation in general that has always faced the church militant.

As for what he will be doing in the future, Preus said that is not yet clear.  He said he has let Missouri District President James Kalthoff know that he is open to a call.

“I have enjoyed my work as first vice president,” Preus said, citing especially his service as chairman of the Synod’s Colloquy Committee for the Pastoral Ministry.  He said he took joy in interviewing pastors from more than 35 church bodies who wanted to join the Missouri Synod.

The Synod’s Bylaws also provide for up to six months of full salary to full-time officers who are not re-elected.  The outgoing officer is to provide transitional service during that time, but the service and salary stop when another full-time position is accepted.

“My thoughts about the future run a rather wide gamut right now,” Preus told Reporter.  He said, “I want to continue working in