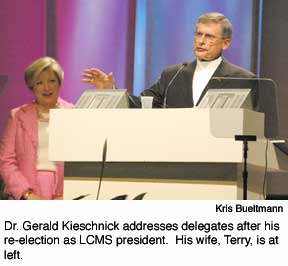 Kieschnick, 61, was elected on the first ballot on the opening day of the convention, with 52.8 percent of the votes cast.

“My belief is that this is not so much a vote for me personally as for the vision shared these past three years and for my ministry of the past 34 years,” Kieschnick said in remarks following his re-election.

Diekelman, 57, subsequently was elected to his first term as Synod first vice president on the second ballot for that office.  He received 641 votes to 588 for incumbent Daniel P

Two other nominees were dropped after the first ballot.  They were Wyoming District President Ronald Garwood and Rev. Vernon Gundermann, pastor of Concordia Lutheran Church, Kirkwood, Mo.  Each received 30 votes.

Kieschnick acknowledged that “we have experienced a period of disagreement the past three years,” including among the Synod’s elected leaders.  He said it is his prayer that this not continue.

The president also acknowledged the support of his wife, Terry, and his family.  Terry Kieschnick walked to the podium as the assembly rose in applause.

Kieschnick is a graduate of Concordia Theological Seminary [then located in Springfield, Ill., now in Fort Wayne, Ind.] and received an honorary doctor of laws degree in 1996 from Concordia University, Austin, Texas.  He and Terry have two grown children.

His installation, and that of other LCMS officers elected during the church body’s weeklong convention, will take place in September.

Prior to becoming the Synod’s president in 2001, Kieschnick served 10 years as president of the church body’s Texas District.  Before that, he was with the Lutheran Foundation of Texas, first as director of development (1986-88) and then as executive director (1988-91).  He also has served as pastor of three LCMS congregations, one in Mississippi and two in Texas.