Is the “Great Commission,” or reaching the lost for Christ, the “primary focus” of today’s Lutheran Church–Missouri Synod?

Two-thirds of respondents to an online survey posing that question said no.

When asked in a follow-up question what the Synod should do to become more adept at carrying out the Great Commission, the top answer among “no” respondents (29 percent) was “stop in-fighting, politics and judgmental attitude — become outward, rather than inward, focused.”

The one-third of respondents who answered that yes, outreach is the primary focus of today’s Missouri 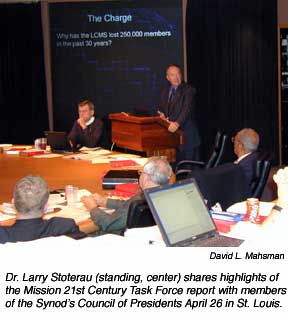 Synod, were asked a follow-up question similar to their counterparts: “What specific things might the LCMS do to enhance its focus in implementing the Great Commission?”

Although he isn’t really surprised by the responses, Dr. Larry Stoterau is excited about them, he said, and the potential they offer for effecting real change in the Synod.

Stoterau is president of the Synod’s Pacific Southwest District and chairman of the Mission 21st Century Task Force, which sponsored the online survey last summer.  What did surprise him, he said, was the number of people who took the time to log onto the Web site and answer the open-ended questions.

The task force had hoped to get 1,000 responses to its survey, Stoterau said, which would have provided a good, though not “scientific,” sampling.

About 30 of those who filled out the online questionnaire shared even more of their opinions in separate e-mails to Stoterau because there wasn’t enough room on the survey form to say everything they wanted to say — an indication, he said, “that the people of our church are really passionate about mission.”

And a full 75 percent of respondents also provided their name and telephone number “and said, `call me — I’d like to talk more about this,’ which indicated to us that we really hit a nerve in the church,” he said.  “It’s overwhelming to us to get that kind of response.”

The Mission 21st Century Task Force was appointed by Synod President Gerald Kieschnick in 2002 to find out why the Missouri Synod’s membership is declining, suggest ways for reversing that trend, and develop overtures for the 2004 Synod convention that “capture the mission heart of the delegates and can effect change.”

The task force spent the first year gathering statistics, studying previous survey results about the Synod and other U.S. Lutherans, and seeking ideas and observations from a variety of current and former LCMS leaders, including pastors, seminary and university faculty, national and district staff, and experts from outside the Synod.

“What we tried to do was get a picture from a variety of places inside and outside the church,” Stoterau said, in an attempt to answer the question, “why are we declining as a church body?”

Baptized membership in the Synod has fallen by more than 250,000 since its peak in 1972 at 2,781,297, and “net outreach” — the number of adult gains minus the number of adults removed from the rolls — has been negative almost every year since 1969, according to the task force.

The Web-based survey was open to any LCMS member to offer “opinions about what the church should be doing in the future to capture a mission vision,” according to Stoterau.

More than half of survey responses (57 percent) came from laypeople, 25 percent were from pastors, and the remaining 18 percent were provided by other church workers.  Moreover, responses were received from all 35 LCMS districts, according to Stoterau.

“On a percentage basis, the survey is very representative of the Synod,” he said, with no more than 7 percent of responses coming from any one district.

Stoterau said he and other task force members feel good about the survey results because they mirror the task force’s research.  “It basically affirmed all the things that we learned,” he said.

Those learnings are explained in the task force’s report, “Mission in the 21st Century,” which is printed in the Convention Workbook, beginning on Page 17, and is posted on the Web site for the Synod President’s Office at www.lcms.org/president.

The task force has prepared a half-dozen convention overtures designed to increase mission efforts in North America.  They encourage actions such as “establishing national goals for Ablaze!,” “helping every congregation see itself as a mission outpost,” “supporting ethnic ministries,” and “being missional and confessional in a postmodern world.”

Other overtures prepared by the task force suggest changes in the training of professional church workers that are designed to make them more missional in their thinking and teaching, and call for involving the Council of Presidents in the certification — and continuing education — of pastors.

After Stoterau reported on the task force to the Council of Presidents (COP) April 26, the COP’s members discussed and without dissent agreed to report in one year to each other how many families or individuals each brought at least once to church, “where the Word is preached.”  Second Vice President Wallace Schulz, who made the motion, told his colleagues, “If we don’t [bring people into the church], how can we tell others to do it?”

Stoterau said the task force is asking congregations to read the full report and to discuss it, especially how it relates to each congregation and its ministry.

“All of our churches claim to be Great Commission churches, but if you ask, `what’s your strategy?’ [for outreach], 75 percent of them don’t have one,” he said.

“We want the church to be talking about this before they come to the convention,” Stoterau said.  “We want to build momentum for The Lutheran Church–Missouri Synod to again become a missionary church in the 21st century in North America.”