LCMS World Mission plans to mail to congregations and other mission partners in August a new CD-ROM that includes a variety of resources designed to help them get involved in the Ablaze! effort, including a new “kit” of prayer resources.

In conjunction with the Ablaze! goal of sharing the Gospel with 100 million people worldwide by 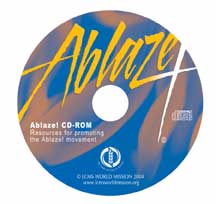 2017, the 500th anniversary of the Reformation, LCMS World Mission is inviting all Synod members and mission partners to take part in “Keep the Vigil: One Million Hours of Prayer for Ablaze!“

According to a news release, “Keep the Vigil” is an “opportunity to unite as Lutherans in mission around the globe and lay our requests before the Lord for 100 million unreached or uncommitted people, for the work of LCMS missionaries, for national churches and other partners, and for the involvement of the membership of the LCMS.”

A “kit” with ideas and promotional items that can be used for prayer vigils is included on the new Ablaze! CD-ROM.

The CD also includes other Ablaze! resources, including: