A new cadre of synodical “reconcilers” is being trained this year in six-day class sessions at the Synod’s International Center in St. Louis. 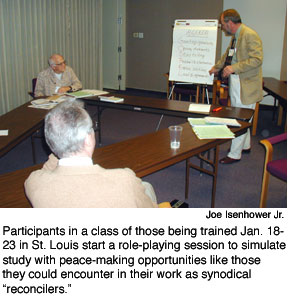 e internal disputes involving the Synod or its members, districts, organizations, and other agencies.

Synod Secretary Raymond Hartwig said that all reconcilers — including a number who had been trained before this year — were participating in this latest round of classes “partly because of changes authorized by the 2004 convention, but also because this is a good refresher course for veteran reconcilers.”

He explained that last year’s Synod convention approved “several significant changes” to the dispute-resolution process that has been in place since it was first authorized by the 1992 Synod convention.  Those changes included a requirement of consultations with district presidents and added “hearing facilitators” to serve with panels that hold hearings on matters in dispute.

Since Hartwig will choose 25 reconcilers from the earlier classes to serve as hearing facilitators, district boards will be selecting 25 additional people to replace those reconcilers — and to attend the fourth training week in June.  A total of 165 reconcilers will be trained.

Kober describes Ambassadors of Reconciliation — now a “Recognized Service Organization” with the Synod — as “an international ministry founded to equip Lutherans and their churches for living, proclaiming, and cultivating lifestyles of reconciliation.”

He said that “reconciliation in Christ has been foundational” in the Synod reconciler-training process since the early 1990s, but that this latest round of training “increases the focus on confession and forgiveness throughout the process.”

This year’s sessions, like those before, include “the entire group and small-group role-playing of various case studies with peace-making opportunities that reconcilers encounter in their work,” Kober said.

“But, now with the added emphasis on confession and forgiveness,” he explained, “our Synod’s reconcilers are learning how to announce God’s grace in confession — from a pastor to a penitent and between fellow believers.”

Ann Wagner of Blooming Grove, N.Y., returned for reconciler training this year after first being trained in 1993.

“I am a real advocate of the dispute-resolution process in our Synod as it has developed over the years,” Wagner told Reporter.  “And I think the added emphasis on confession and forgiveness is wonderful.”

Retired from a banking career, Wagner is a state-certified ombudsman who advocates for patients in long-term nursing care.  She says she has participated in 10-15 reconciliation meetings and two dispute-resolution panels over the years.

Wagner said she views her Synod reconciler training as “a real gift of God,” especially as she gets “a lot of calls from pastors and others in the [Atlantic] district who have a situation for which they would like advice.  I find that very encouraging.”

“But I think the new emphasis on confession and absolution this time around will make a big difference in our day-to-day dealings,” he told Reporter after returning from the sessions in St. Louis last month.

Marcis said that he plans to have his congregation work through a Bible study on peacemaking that reconcilers are receiving at this year’s training and is “very excited” that Ambassadors of Reconciliation is planning to introduce 16 additional Bible studies over the next four years.