Chaplain (Major) James Lucas returned home to his family in Nappanee, Ind., in September after spending nearly 11 months in Iraq.  And, while he’s happy to be home, he regrets “leaving the work behind” and is considering helping with hurricane relief.

Lucas, a Louisiana National Guard chaplain who was called to active duty in May 2004, is former pastor of Christ and Faith Lutheran churches in Elkhart and 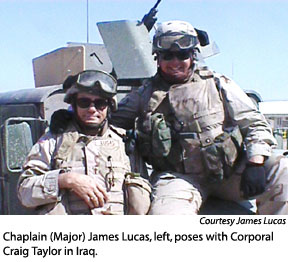 Hugoton, Kan., respectively.  He resigned from parish service after he was deployed, trading his Midwestern ministry for leading worship services and counseling soldiers in Iraq.

In a Sept. 9 e-mail to friends and supporters, written nearly two weeks before he was to leave for the United States, Lucas reflected on his tour of duty as a chaplain to soldiers whose work he likened to “being a beat cop in a really bad neighborhood.”

But, perhaps contrary to what some news reports might suggest, Lucas says that’s the case in only four of Iraq’s 18 provinces — the country’s four major population and political centers.

Unfortunately, those four provinces have the power to stall adoption of the country’s new constitution, since “it only takes three provinces to veto,” according to Lucas.  Terrorist forces, he says, “have focused their attention on persuading the people of these four provinces that the new government is impotent,” which makes the work of the coalition “all the harder because we are trying hard to win the hearts and minds of the people with our many projects.”

Those projects included providing increased security, enabling Iraqi citizens to vote and travel safely, as well as offering heaters and blackboards to schools, blankets and food to lo 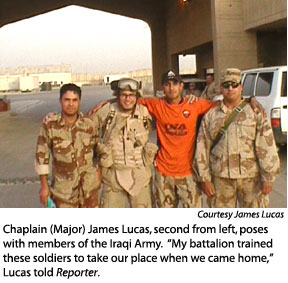 cal families, and water-treatment facilities and medical clinics to communities.

While threats to coalition soldiers have lessened in recent months, attacks against Iraqi civilians have increased, says Lucas, and local terrorists now are targeting “the people we are trying to help.”

And, although he was often discouraged by low turnout at his chapel activities, Lucas says he is “pleased with the many goals and projects I accomplished and the soldiers whose lives I touched in meaningful ways.

“I am very satisfied with my work here, as was my commander, who surprised me with a Bronze Star medal!  Such a thing is a reminder that nothing we do is really forgotten; nothing we do goes unwatched.  Our Lord Jesus has much greater things in store for us on the last ‘Last Day’ when He shall say, ‘Well done, good and faithful servant.  You have been faithful over little; I will put you over much.'”

Lucas said he is thankful for the “patriotic and godly support of many, many people” who “helped put me here and keep me here.”

“Hundreds of people across the nation were behind me, like Aaron holding up Moses’ arms, holding me up in prayer, boosting my morale with beef jerky and Vernor’s Ginger Ale and spice gum drops, and encouraging me with letters and e-mail messages.”

In a Sept. 23 e-mail to Reporter, Lucas urged those still serving in Iraq and other war zones to “remember that the Lord has promised that ‘all things work for good for those who love the Lord and are called according to His purposes.’

“The real enemy is the Prince of Darkness,” Lucas said.  “Our victory over the only real enemy is as sure as Jesus rising from the dead, ascending into heaven and sitting on the right hand of the Father.  Human enemies only give God’s people opportunity to demonstrate their faith in the Word of God.”