As Gulf Coast residents prepared to assess damage from their second hurricane in less than a month, many no doubt echoed the weariness of Lutheran school principal Lois Rost.

“Everywhere I looked there was wreckage,” said Rost, principal of Prince of Peace Lutheran School in the Orleans Parish of New Orleans, which was heavily damaged by Hurricane Katrina.  Via e-mail, she described how a levee breach caused by Hurricane Rita compounded challenges in that already battered city. 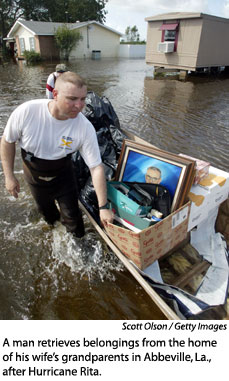 who, as of Sept. 27, still had not been allowed close enough to the school to see its devastation firsthand.  “And to think … hurricane season is only half over.”

Rita caused less damage than originally feared.  But the Sept. 24 storm still displaced millions and wreaked an estimated $8 billion in damages in southeastern Texas.  It also triggered new flooding that added to the damage and disruption in already storm-shattered southern Louisiana that began with Katrina on Aug. 29.

Early reports indicate heavy damage in areas that include Port Arthur, Beaumont, Orange, and Jasper, Texas, and Lake Charles, La., all homes to LCMS congregations.  But at press time, only emergency personnel were being permitted into regions that are tattered with downed power lines and debris.

“We are anxious to get on the ground and offer support to our pastors and congregation leaders,” Hernandez said.  “Once we see the extent of the damage, we will better know how we can help them respond to the needs of their congregations and their communities.”

In Texas, an estimated 3 million evacuees are beginning to return home.  The staff and young clients of Lutheran Social Services of the South (LSSS) were among those who joined the massive, pre-Rita evacuation.  The Austin-based agency evacuated 23 medically fragile foster children and their foster families in potentially hazardous areas to an LSSS retirement community in Brenham; 45 abused and neglected children from the Krause Children’s Center in Katy were taken to the New Life Children’s Center at Canyon Lake.  LSSS serves as the response agency in both the Texas and Southern districts for Lutheran Disaster Response.

In the days before the storm hit, Texas District President Linderman urged LCMS members there to review that district’s disaster plan, which had been prepared by a disaster response task force about two years ago and posted on the district Web site.  Today, the district continues to use the site to provide links to Rita and Katrina news and recovery information.

Back in New Orleans, Principal Lois Rost waited in line with other survivors for a box of Meals Ready to Eat.  She described long lines at the few open gas stations, grocery stores, and fast-food restaurants.

She also waits for roadblocks to be lifted so she can finally see her school.  “I wait with my coveralls, respirator, goggles, rubber gloves, and rubber boots,” Rost said in her e-mail message to members of the Lutheran Education Association Leadership Network.

And that’s just one example of overwhelming challenges faced by LCMS members and professional church workers throughout the Gulf Coast.  And one reason, according to LCMS World Relief/Human Care Executive Director Rev. Matthew Harrison, why continued financial support from the greater church body is critical.

Owing to the high number of major-disaster responses by LCMS World Relief/Human Care, Harrison urged LCMS congregations to consider adding the ministry to their annual budgets.

“From the Sept. 11 terrorist attacks to the tsunami to the unprecedented hurricane devastation, we need congregational support more than ever because we get no funding from the Synod,” he said.