Statistics for the 2004-05 academic year show that schools operated by LCMS congregations “continue to be effective in Christian outreach,” says William Cochran, director of School Ministry with the Synod’s Board for District and Congregational Services. 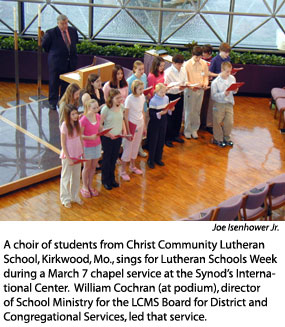 The school-ministry office that week mailed its report on 2004-05 statistics to Lutheran schools and others.

Cochran said he based his observation on the reported numbers of Lutheran school children and their parents who were added to sponsoring congregations’ membership rolls.

In the year since September 2003, according to the 2004-05 statistics, schools reported that 3,737 students were baptized, 2,485 of their parents or guardians were baptized or confirmed, and 3,803 transferred their membership to sponsoring congregations.

Although those figures are down from the statistics reported for the previous year, Cochran said he believes the current statistics are more accurate, since for the first time they were collected first by education executives in the districts before being compiled by the LCMS Office of Rosters and Statistics.

“I’m confident that a fair year-to-year comparison of these statistics can only be made next year this time, after we have the 2005-2006 school year’s numbers,” he said.

The current statistics show that for this school year there are a total of 2,526 schools operated by Lutheran congregations and 183 operated by associations of congregations.  Of those schools, 1,397 are early-childhood centers, 1,028 elementary schools, and 101 high schools.

The report indicates that there are a total of 18,000 teachers and administrators in all Lutheran schools and early-childhood centers for the 2004-05 school year.

The average starting salary for new teachers at Lutheran schools this year is given at $23,742.

This year’s statistics also list 48 Lutheran early-childhood centers with enrollments of 190 or higher, 52 elementary schools with at least 400 students, and 21 high schools with 300 or more students.

The latest Lutheran-school statistics also are available via the Web.  To download the statistical report, go to http://www.lcms.org, click on “Ministry Areas,” “District and Congregational Services,” then on “School Ministry,” “School Ministry Information,” and finally on “Statistics for the 2004-2005 School Year.”