Scriptural authority is the foundational issue in dealing with the blessing of same-sex unions and qualifications for the professional ministries, according to a Lutheran Church–Missouri Synod response to the report of the Studies on 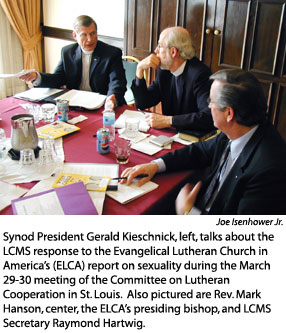 Sexuality Task Force of the Evangelical Lutheran Church in America.

“As the LCMS has wrestled with the sensitive issue of homosexuality, it has had to return time and again to the more fundamental question of how we go about addressing these questions in the first place: namely on the basis of the Holy Scriptures as God’s inspired and inerrant Word,” says the response.

Noting that the Bible clearly identifies homosexual behavior as sinful, the LCMS statement said the authority of Scriptures guides consideration of other moral and ethical questions such as abortion, euthanasia, assisted suicide, cloning and stem-cell research.

The statement was shared during theological discussions on March 29 between representatives of the two church bodies.  It has been posted on the Synod’s Web site, sent via LCMS e-News and sent to members of the Council of Presidents, Board of Directors, and the Commission on Theology and Church Relations.

The ELCA Church Council will consider the report at its April 8-11 meeting in Chicago and will prepare a resolution for the ELCA Churchwide Assembly when it meets Aug. 8-14 in Orlando.

The LCMS statement commended the report for its reaffirmation of the ELCA position that “marriage is a lifelong covenant of faithfulness between a man and a woman,” and its decision not to recommend a revision of the current standards regarding sexual conduct for ministers in the ELCA.

“However, the report does not speak clearly and authoritatively regarding homosexual behavior and the ordination of those who are openly involved in such behavior,” the LCMS statement said.  “This goes contrary to the historic and universal understanding of the Christian Church regarding what the Holy Scriptures teach about homosexual behavior as contrary to God’s will and about the biblical qualifications for holding the pastoral office.”

The LCMS statement described the Synod’s own efforts to deal with ministry to homosexuals.  When a 1973 convention resolution set an official position that homosexual behavior is “intrinsically sinful,” it also spoke of “ministering the forgiveness of our Lord Jesus Christ to any and all sinners who are penitent.”

The statement also cites a report of the LCMS Commission on Theology and Church Relations calling on the church to recognize “that all people are born in need of deliverance from the effects which sin has imposed on their lives.”  The CTCR report said ” there are those persons who, apart from any deliberate choice on their part, have a predisposition toward homosexuality,” and urged the church to offer the “compassionate help they need  to overcome the temptations which beset them and to remain chaste before God despite their homosexual orientation.”

The statement also cites other LCMS convention resolutions and reports dealing with ministry to homosexuals and instances among professional church workers.

The ELCA, with 5 million members, and the LCMS, with 2.5 million members, are the largest Lutheran church bodies in the United States.  They do not share altar and pulpit fellowship but they cooperate in disaster response, world relief efforts, military chaplaincy, and some human-care services.

The LCMS statement reflects concern that the topic of homosexual behavior may further distance relationships between the two church bodies.

Serving with `Laborers For Christ` is rewarding, say retirees