“These people are brilliant,” said Sarah Fields of Hobart, Ind., as she summed up for Reporter her impressions as a first-time participant at Lutherans For Life’s (LFL) 2005 national conference Nov. 11-13 in St. Louis.

Sarah, with 2-year-old daughter Anna in tow, and her husband Carl holding their 6-month-old son, John, had just heard the opening speakers for LFL’s 23rd a 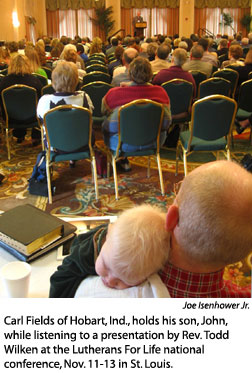 Lutherans For Life, describing itself as “the only pan-Lutheran pro-life organization in the nation,” is based in Nevada, Iowa, and has 15 state or regional federations, 155 local chapters, and 745 “life ministry coordinators” nationwide.

Sarah and Carl Fields have been involved with their Lake County (Ind.) National Right to Life group for well over a year, but joined LFL only a month before this year’s conference.

“We’re very glad we did,” says Sarah.  “We’re used to hearing about pro-life causes from an academic perspective, but not from the Christian perspective, like we’re hearing here — the perspective including God’s grace and mercy.”

“We’ve heard and read a lot about pro-life causes from a non-sectarian view,” said Carl.  “But, just like Todd Wilken said in his presentation this morning, the Christian comes at it from the bigger issue of fallen mankind.  Abortion and other life issues are symptoms of a fallen world, and it’s eye-opening to realize the answers are in God’s Word, and to see it in the perspective of His grace and mercy, with salvation through Christ.”

The Fields are members of Redeemer Lutheran Church, Highland Ind., which Carl pinpoints as between Chicago and Valparaiso.

Rev. Todd Wilken, host of the nationally syndicated program “Issues, Etc.” on Radio Station KFUO-AM in St. Louis, had just finished speaking to the conference on what he termed “a cross-shaped theology of life.”

Tracing Christ’s life from the virgin’s womb through His death on the cross, Wilken asked, “How could Christians not be pro-life when the very means by which God redeemed fallen men was a human life?”

Wesley J. Smith, an award-winning author from Castro Valley, Calif., gave a keynote address just before Wilken spoke, and was on the bioethics conference program the night before.

Smith said that many in the field of bioethics no longer believe that human life has value “simply and merely because it is human.”  Rather they see it as “expendable, exploitable, and disposable.”

Too often when discussing a human embryo, an unborn child, or the elderly or disabled, Smith said, the question seems to be, “Who can we kill and get a good night’s sleep?”

“No human life should ever be seen as an object,” said Smith.  “Every human being should be seen as a subject.”

Smith is an attorney for the International Task Force on Euthanasia and Assisted Suicide, a special consultant for the Center for Bioethics and Culture, and a senior fellow at the Discovery Institute, which is a nonpartisan public-policy think tank.

LFL conference sessions also included workshops on such topics as euthanasia, assisted suicide, the media, the dangers of the right-to-die mentality, Christian care giving, advance directives, and “the mission, message, and manner” of LFL.

Dr. James I. Lamb, the organization’s executive director, led Sunday Bible study and a worship service on the conference theme, “In Life, In Death, Abide With Me,” based on Phil. 1:20-21.

Lamb recalled that since the Roe v. Wade Supreme Court decision that legalized the procedure in 1973, “over 45 million babies have been killed through surgical abortion in this country — 36,000 every day, or one about every 24 seconds.”

“The legacy abortion gives us is that death is the solution to a problem, and that certain people are better off dead,” Lamb said.  “[But] as long as God gives life, then God is at work giving life meaning and purpose.”

Noting that “Paul reminded us [in the theme text] today that certainly it is ‘far better’ to depart and be with Christ … he also reminded us that the timing is in God’s hands.  If He gives us continued life, then in His plan, it is ‘more necessary’ that we go on living.  Whether we live or die, we know that Christ is at work and that He will be exalted.”

“I’m thankful that Lutherans For Life has always sought to address the issues in a God-directing, God-pleasing way, using God’s Word as the base,” said Ethel Peterson, 85, of Grafton, Wis., who has attended national conferences “since Jean Garton was LFL president in the 1970s and 1980s,” as she puts it.

Active in the Ozaukee (Wis.) chapter of LFL, Peterson gets involved in its rose sale in May, and at the national conference she buys recordings of speakers and picks up other LFL resources, taking them home to “give to different people,” including fellow members of First Immanuel Lutheran Church, in Cedarburg, Wis.

But she said the “reality” of her involvement in the organization “hit home” several years ago, when a granddaughter became pregnant out of wedlock and the baby’s father wanted her to have an abortion.

“But she didn’t have it,” Peterson told Reporter — “and I don’t know if I made that much of a difference.  But I know that God did.”

She said her granddaughter and the now 5-year-old’s father planned to marry after she returned from the 2005 conference.

“We equip people to make life-affirming decisions,” LFL President Diane Schroeder told the conference.  “You can make a difference in the lives around you … speak the truth in love and patiently wait for miracles.”