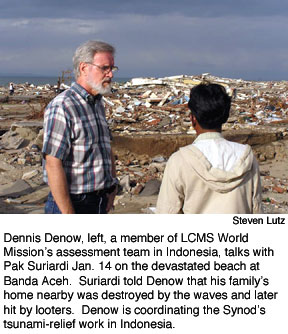 “incredible” challenges of massive cleanup and long-term rebuilding are among key recommendations from two LCMS assessment teams for “next step” relief efforts in those tsunami-ravaged countries.

“Cleanup is going to be incredible, and it’s going to continue for some time,” said Rev. Ted Engelbrecht, LCMS World Mission facilitator for Southeast Asia, who helped assess needs following the Dec. 26 tsunami.

“We need to deploy people there so we’re not attempting to do projects by long distance,” he continued.

Those two ministries worked in partnership to deploy the assessment teams less than two weeks after the tsunami.

The team members — all LCMS World Mission alumni or current personnel with broad international expertise in health care, community development, and missions outreach — spent seven to 10 days evaluating needs in Sri Lanka and Indonesia, the two countries with the most tsunami casualties.

“We looked at the devastation and could just stand and stare,” said Dennis Denow, an LCMS World Mission education specialist based in Papua Province, Indonesia.  “It takes so long and is so hard to try and understand.  Where do you begin [with relief efforts] when you are talking about thousands upon thousands of dead and missing, about whole families and whole villages gone?”

To date, the tsunami has claimed at least 190,000 lives; thousands more remain missing and some 5 million are homeless.

Team members described “devastation as far as the eye can see” and “dazed people” searching refugee camps for missing loved ones.  They told of grief-stricken survivors holding photos of “lost” loved ones.

According to their reports, about 40 percent of the tsunami victims in Sri Lanka were children; recovery of bodies in some areas is expected to continue for as long as six months.

Acknowledging there was no clear “best way” to provide help after such an enormous tragedy, assessment team members offered what they called “broad stroke” recommendations to address physical and spiritual needs in two countries with complex challenges.

In general, the teams stressed the need to focus on areas where other relief agencies are not already working to avoid duplicating services and coordinating, when possible, through local Lutheran congregations.

Michelle Hoeppner, an LCMS World Mission community development worker in Southeast Asia, emphasized the importance of laying the groundwork “to better equip and build capacity of our partner churches.”

The team that surveyed needs in Sri Lanka said that country’s government welcomes outside assistance.  The Synod has a partner church, the Lanka Lutheran Church, through which to work.

The other team focused on Indonesia, which, Denow said, is the nation with the world’s largest Muslim population.  There they focused on two distinct areas: Nias, a small, rural island with a large Christian population, and Banda Aceh, a region that had been closed to Western influence before suffering some of the greatest tsunami-related devastation.

In addition to posting staff on-site in both Sri Lanka and Indonesia, the assessment teams recommended addressing a top concern of tsunami survivors: to help their children resume their education.

“There’s a big need to get the refugees out of the schools so the kids can get back in school,” he said.  “They need alternative shelter for refugees plus school supplies, shoes, and other things that the children need when they go back to school.”

Team members recommended either building or providing support for a Christian school in Nias, perhaps to serve refugee children.

In Indonesia, the assessment team also recommended working through local congregations to sponsor self-help projects that will yield long-term benefits.  One proposal was to participate in a “mercy corps,” hiring refugees to do cleanup work.

The Sri Lanka assessment team specifically cited the needs of two Lutheran pastors in Batticaloa.  One pastor lost a daughter, his chapel, and parsonage to the tsunami; another pastor took 15 orphans into his own home when floodwaters damaged a Lutheran orphanage.

Just as the assessment teams departed within 48 hours after they were recruited, they urged a quick, continued response to ongoing needs.  “If we’re not there now, we’re not building relationships and we won’t be a part of rebuilding later,” said Dr. Keith Harvey, an LCMS World Mission medical missionary serving in Kyrgyzstan.  “We must act now.”

And while their reports were filled with stories of grief and devastation, they also included glimmers of hope.  Photos showed LCMS team members listening to survivors’ personal stories and sharing hugs of compassion.  Often, team members said, survivors asked why they had come to South Asia and why they cared about strangers.

Hoefer said he had the opportunity to reply, “I am a Christian.  Caring is something I cannot not do.”

The LCMS members marveled at the tsunami survivors’ resiliency.  “These are still a cheerful, optimistic people,” said Debra Wesche, a former LCMS medical missionary, now a hospice nurse in Ann Arbor, Mich.  “They seem to be dealing with this tragedy, at least on the surface, better than we can probably understand.”

“This is an extremely important moment for the LCMS,” he said.  “We have the opportunity to share acts of mercy.  We don’t do this to do some bait and switch evangelism. We love people body and soul, in the name of Jesus.”

Kim Plummer Krull is a freelance writer in St. Louis