“God has exceeded our small expectations,” says LCMS missionary Sue Pfeil in Kyrgyzstan, who reports that more than 650 men, women, and childr 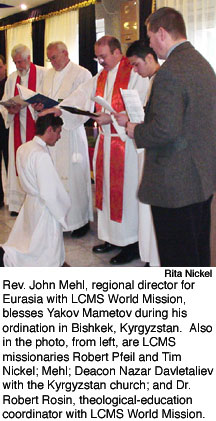 en were involved in Lutheran worship services, Sunday schools, Bible studies, confirmation classes, and cell groups by the end of 2004.

The missionaries had hoped to see 400 Kyrgyz people involved in such activities by year’s end, she said.

Since 1998, when Synod missionaries Rev. Bob and Sue Pfeil and Rev. Tim and Rita Nickel arrived in Kyrgyzstan, their ministries have grown to include the establishment of 16 congregations and a pastoral-training program with more than a dozen students.

One of them, Rev. Yakov Mametov, became the first ordained pastor of Concordia Lutheran Church of Kyrgyzstan, the three-year-old national church body, when he was ordained Dec. 12 in Bishkek.

“He loves to study and learn the Word of God.  He also loves to teach,” Pfeil said via e-mail.  “My hope for him is that he will become the future trainer of Lutheran pastors in Kyrgyzstan.”

regional director for Eurasia, LCMS World Mission, described Mametov as “a very humble man for whom people have great respect.”  Mehl, who ordained Mametov, said some people traveled 75 miles to attend the service.

As a pastor, Mametov leads Sunday worship services and teaches some theological-education classes.  He will be “totally in charge” of the Bishkek congregation when the Pfeils take a six-month furlough beginning in May.

Mehl says he is hopeful that Mametov will be “a living example of a servant leader, not only for others studying to service the church, but to the members, as well.”

New from CPH: Sermons of Nagel