It hasn’t bought more land or built more classrooms, but Lutheran High School of Orange County (Calif.) is making its Christian education available to a wider range of students than ever before.

The LCMS high school now offers 26 classes — about half of its curriculum — online, and administra 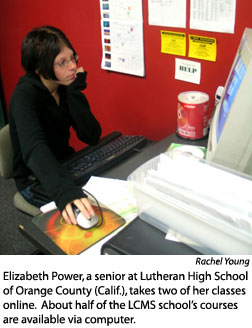 tors there say they are working toward making all courses accessible to students worldwide via a Web site.

Launched Sept. 5 and promoted nationally beginning in late October, “Orange Lutheran High School Online,” or “OLO,” gives students an opportunity to earn a high-school diploma without ever leaving home.  All they need is a computer with Internet access.

Current online courses in math, science, English, history, music, Spanish, and theology include lectures, reading assignments, homework, quizzes, tests, even class “discussions” — almost everything a traditional class would include — plus some valuable “extras,” according to OLO Director Patty Young.

Those extras include multi-media programs that allow students to use “interactive maps.”  Students in OLO’s New Testament class, for example, can trace journeys of the Apostle Paul on such a map,”clicking” with a computer mouse on different sites to “experience the sights and sounds of the world that Paul lived in,” according to Young.

Another advantage OLO has over its traditional, “on-ground” counterpart is that students can’t “hide,” adds Young.

“In a traditional classroom, a student can sit in the back and not say much,” she explained.  “But in a virtual classroom, what we’ve discovered is that every student has to participate.  A teacher will draw out a student’s response” whether that student is shy, self-conscious about his or her appearance, or new to the school.  “It doesn’t matter because online it’s the great equalizer — they’ll really open up and will share their opinions and thoughts, especially if they don’t know each other,” said Young.

Orange Lutheran began offering online courses more than two years ago as a pilot program in collaboration with the University of Phoenix, a public university that has offered Web-based degree programs for years.  Administrators from the Phoenix program helped the LCMS high school set up their online program, design classes, hire and train teachers (see related story), and produce promotional materials.

“Words of Scripture are shared on a daily basis — it’s just online,” says Young.  OLO’s curriculum is the same as Orange Lutheran’s on-ground curriculum, she said.

“We can’t compromise who we are,” said Gregg Pinick, principal of Lutheran High, Orange County.  “So if it’s going to say ‘Orange Lutheran Online,’ it’s going to be an Orange Lutheran class.  And that means [there will be] opportunities for sharing Jesus Christ in those ‘classrooms’ — be it math, English, social studies, or theology.  We have to be able to do that.”

At present about 100 students are taking OLO classes — many are juniors and seniors enrolled at the Orange Lutheran campus who are taking a mix of on-ground and online courses.  But more than 40 are full-time, diploma-seeking, online students, including a boy from Bermuda and an Orange County boy who takes all his classes online but also plays for the on-ground school’s “Lancers” football team.

Of the latter student, Pinick says, “When he found out that he could also play interscholastic sports and still be online, he got the best of both worlds.  So he does his online courses, and then at the end of the day he comes [to the campus] for football practice.”  The local boy never sets foot in a traditional classroom, says Pinick, “but he’s a Lancer.”

Each online class runs five days a week for eight weeks, and students are required to log on and do assignments each weekday.  They can do their online work anytime during each of those 24-hour periods, but they must participate each day.  Teachers post lectures, assignments, and discussion questions, and provide feedback to students — all online.

Young says OLO students log in “from all over the country.”  The program is ideal, she said, for home-schooling families, Americans living overseas, and U.S. students who need to make up a course or two to graduate.

Students who are “pre-motivated” are best-suited for OLO, Young said, because “it’s a rigorous curriculum that would require someone who has strong writing skills and reading comprehension.”  At the same time, she adds, it doesn’t require any fancy, high-tech equipment.

Orange Lutheran senior Kris Gilman of Anaheim Hills, Calif., is taking two online classes in addition to on-ground courses.  “There are both advantages and disadvantages” to the online program, according to Gilman, who says he enjoys being able to do coursework “at home on my own time” but admits it is “sometimes difficult to express myself to the teachers.”

Senior Ashley Baratta of Orange says she enjoys being able to “log on any time of the day.”  Course content, Baratta adds, “is just as good” as her on-ground classes.  “We move pretty quickly, but I like it.”

Elizabeth Power, a senior from Garden Grove, Calif., says her two online classes give her “extra time in my day so I can do both online work, as well as my regular homework.”  She also likes “the open forum with other students [where] discussions are as if I am actually in a classroom.”  And, she adds, “I like that no one can interrupt.”

The flexibility of online courses is a plus for teenagers, says Pinick, and OLO courses cost students about half as much tuition as taking them on the Orange Lutheran campus.

But the real beauty of the program, he says, is its potential for sharing the Gospel worldwide — not just in Orange, Calif.  Pinick says he expects OLO to attract high-school students from all over the world — both Christians and non-Christians.

“It’s exciting,” he said, to consider the impact of OLO’s Christian-based curriculum on those who may not have heard the Gospel.  Says Pinick: “We don’t know fully how God will use [OLO], except we know that this is what we’re supposed to be doing.”