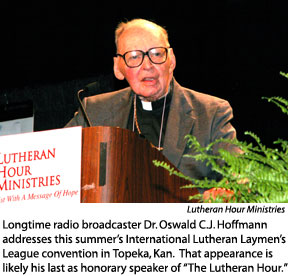 “Ossie,” as he is known, resides in a St. Louis-area retirement home.  His wife, Marcia, died in November 2000.  The couple had been married 60 years.

Hoffmann, 91, was the voice of radio’s “The Lutheran Hour” for 33 years — from 1955 to 1988 — and was considered “a Sunday morning institution, touching millions of people’s lives worldwide through his powerful, Spirit-filled radio sermons,” according to an LHM news release.

In the 17 years since his retirement as speaker of “The Lutheran Hour,” Hoffmann made numerous public appearances, traveled worldwide on behalf of the ministry, and corresponded with many people.

A cover story in the August 2002 Lutheran Witness notes that when Hoffmann became “The Lutheran Hour” speaker in 1955, the program had a $750,000 budget and was operating in the red.  When he left the post in 1988, the budget for the weekly half-hour program exceeded $9 million.

“It just grew,” Hoffmann said of the show’s popularity.  “We were just telling the world about Jesus Christ.”

“What a blessing Dr. Oswald Hoffmann has been and continues to be to Lutheran Hour Ministries,” said LHM Executive Director Greg Lewis.  “He has passionately shared the Good News of Jesus Christ for decades and has inspired legions of devoted listeners the world over.  We will miss his active participation in ministry, but pray that he has a very restful and happy retirement from his duties as honorary speaker.  We celebrate his lifetime of faithfulness and achievement in his service to our Lord and Savior Jesus Christ.”

“The Lutheran Hour” is the world’s longest-running Christian outreach radio program, airing since 1930.  More than 800 North American radio stations carry the program to an audience of more than 1.2 million people, according to LHM.