Dr. Hoffmann, 91, had been in and out of the hospital in recent weeks, according to Lutheran Hour Ministries (LHM).

LHM Executive Director Greg Lewis described Dr. Hoffmann as “an incredible blessing to Lutheran Hour Ministries and to the millions of listeners who tuned in to ‘The Lutheran Hour’ during his tenure as speaker of the program.  He shared the hope of Christ with people around the world.”

“The Holy Spirit used Dr. Hoffmann to tell the world about its Savior.  And the world listened,” said Rev. Ken Klaus, speaker of “The Lutheran Hour” since 2002.  “For a preacher, that is enough — that is everything.”

Ordained a Lutheran minister in 1939, Dr. Hoffmann served The Lutheran Church–Missouri Synod as a religious leader and ambassador.  He served for nearly 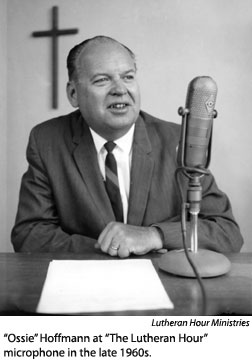 70 years in a career that included varied roles as an author, pastor, broadcaster, classical and linguistics scholar, teacher, translator, public relations director, film production adviser, and member of numerous organizational boards.  He was the author of eight books, including his 1996 autobiography, What More is There to Say But Amen (click here for an excerpt); magazine articles; and thousands of sermons.  Dr. Hoffmann also was a consultant and friend to foreign dignitaries; U.S. presidents Eisenhower, Kennedy, and Nixon; and world religious leaders, including Dr. Billy Graham.

In the 17 years since his retirement as speaker of “The Lutheran Hour,” Dr. Hoffmann made many public appearances, traveled throughout the world on behalf of the ministry, and corresponded with many people, including listeners of the radio program.  He recently had retired from his duties as honorary speaker.

In his last public appearance, Dr. Hoffmann addressed the 88th international convention of the International Lutheran Laymen’s League, held July 28-30 in Topeka, Kan., taking part in an event kicking off a yearlong celebration of the 75th anniversary of “The Lutheran Hour.”

“‘The Lutheran Hour’ has a mission, a mission to bring the Good News of our Lord Jesus Christ in a language people can understand,” Dr. Hoffmann told convention-goers.  “I didn’t do anything special.  I just told the Good News.  I’m still willing to do that.  I look back with great thanksgiving — for myself and for all of the other people who benefitted from the Good News of the Gospel.”