Holding babies is part of this pro-life Bible study

Want to show teenagers how precious God’s gift of life really is?  Let them hold babies!

That’s the view of Becky Ferber, whose sanctity-of-life Bible study for seventh- and eighth-graders is now in its 10th year at Immanuel Lutheran 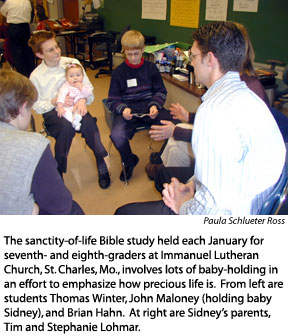 The class, held annually in conjunction with “Life Sunday” and the Jan. 22 anniversary of the Roe v. Wade Supreme Court decision that legalized abortion in this country, lasts about an hour and involves lots of baby-holding — an important component, according to Ferber.

“Because that’s when I think you really realize how precious they are,” Ferber explained.  Instead of focusing on the evils of abortion, she focuses on “the gift of life,” she said.

On the day of her junior-high “life lesson” — also known as “baby Sunday” among the students — Ferber decorates the Sunday-school classroom like a “baby shower,” with balloons, streamers, and decorated cupcakes. 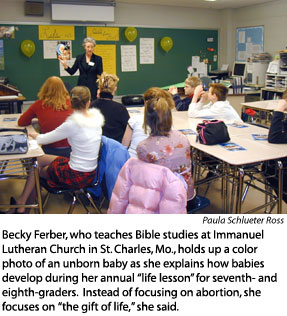 an. 30, involved a dozen 13- and 14-year-old students.  Attending as special guests were four Immanuel couples and their babies, ranging in age from newborn to year-old twins.

Ferber showed color photos of unborn babies and explained how they develop in the womb.  She passed out song sheets so that students could follow along as they listened to a recording of “You Are a Masterpiece” by Sandi Patty.  As the song played, several students smiled and giggled as they watched a friendly 1-year-old toddle about the back of the room.

The students were given strips of paper with questions on them, and were instructed to take turns posing

the questions to the babies’ parents as the students held each of the babies.

Questions ran the gamut, from “How old is your baby?,” to “Do you ever feel like your baby is too much work?,” to “What funny things does your baby do that makes you laugh?”

“They’re so gentle,” he said.  Maloney said he’d never held babies as much as during that day’s “life lesson.”

Catherine Willbrand described the class as “great,” and said “definitely holding the babies” was the highlight for her.  “Especially the younger ones, because they just slept in your arms,” she said.

“Ending one of these baby’s lives would be awful because they are God’s gifts,” she said.

“It is so awesome to see how sweet our junior-high students are with these precious babies,” said Ferber.  “Some students do babysitting already.  Others say they have never held a child so small before.”  Perhaps surprisingly, “the boys are as enthusiastic as the girls in the class — and anxious to take their turns,” she said.

For more information about planning a similar “life lesson” Bible study for junior-high youth, contact Ferber at (636) 949-9228 or via e-mail at rjferber@mac.com.

Letters to the Editor