“We feel safe and calm and are going about our business,” Nickel said 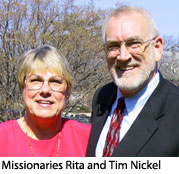 Nickel and her husband, Rev. Tim Nickel, are based in Bishkek, along with Rev. Robert and Susan Pfeil.  At the time of the coup, Susan Pfeil was on leave in the United States.

Also based in Kyrgyzstan is Dr. Keith Harvey, a physician, his wife, Deborah, and the couple’s two children.  The Harveys are spending a year in the country, providing medical care and leading Bible studies in an area just outside Bishkek.  The Harveys were in Kazakhstan during the coup, with plans to return to Kyrgyzstan in a few days.

All of the LCMS families are reported safe.

In an earlier e-mail, sent a day after the Kyrgyz president fled the country, Rita Nickel described the city:

“Two blocks from home I saw the first evidence of looting.  All the windows in the new Turkish furniture store on the corner were broken and the store was empty.  More and more broken bottles (mostly beer and vodka bottles) littered the streets, along with bricks, stones, papers, broken jars of food, and articles of torn clothing, including shoes.  Drunken men were sleeping on the grass and even on the dirty sidewalks … our two new ‘malls’  were in shambles … It was hard to imagine that human beings could do such damage.”

Since then, she said, “each night has been more calm than the previous one.  New elections will be held in June and there is every hope that they will be honest and a democratic government will be put into place.”

Nickel said she and other LCMS staff in Kyrgyzstan are relieved that they were not evacuated.  “We truly do believe that everything is going to be OK,” she said.

Ken Reiner, personnel care manager with LCMS World Mission, said there are no plans to evacuate mission staff from Kyrgyzstan at this time.  He asked LCMS members to pray for Lutheran workers and for the people of Kyrgyzstan during this difficult time.