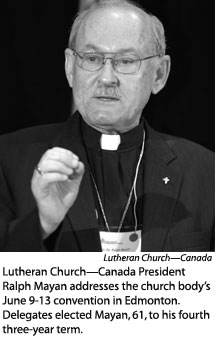 The convention theme, “Proclaiming His Faithfulness,” introduces a new three-year focus for the Canadian church body.  Its sub-theme, “What I received … I delivered to you” (1 Cor.: 15:3), calls attention to this year’s 425th anniversary of the publication of The Book of Concord, the confessional documents of the Lutheran Church.

Convention essayist Dr. Samuel H. Nafzger, executive director of the LCMS Commission on Theology and Church Relations, traced the history of the Reformation and The Book of Concord, relating it to the “Proclaiming His Faithfulness” theme.

“Bold proclamation of the Word is necessary in these times when the very basic designs and desires of God for His creation are called into question,” Kieschnick said in his prepared remarks.

“The strong stance taken by you and the Lutheran Church–Canada on the matter of homosexual marriage reflects such boldness in the Word,” Kieschnick said.  “May the basis of such bold confession forever remain grounded in the sure and certain Word of God.”

Kieschnick also thanked LCC for its partnership with the Synod and other partner churches worldwide in the Ablaze! initiative to reach 100 million unreached or uncommitted people with the Gospel message by 2017.

“As we strive side by side for the faith of the Gospel in this worldwide movement,” he said, “… may the Spirit work through us in His Word, whereby many might be saved.”

LCC became an autonomous partner church with the Synod in 1989, when Missouri Synod congregations in Canada formed the new church body.

Among actions during the five-day convention, delegates adopted resolutions to: