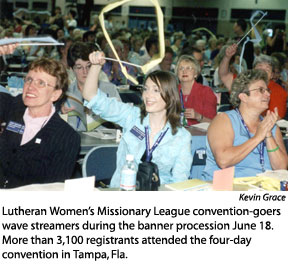 LWML President Linda Reiser described the over-goal funds as “a miracle.”  Reiser had sent word to LWML districts weeks before the fiscal year ended, informing them that contributions were lagging.  By the March 31 deadline the goal had been exceeded by about $1,000, so the bulk of $98,000-plus was received after the deadline.

“We took everything postmarked March 31 and God just kept growing it and growing it,” she said.  “I think He wanted to surprise us and say, ‘Look, $1,000’s not enough.  I’ve got big plans for yo 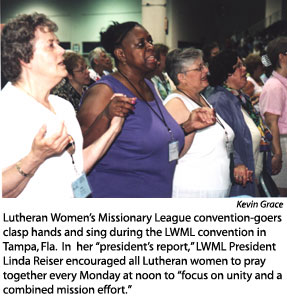 All of the organization’s mission goals are “faith based,” Reiser said, and the new goal of $1.625 million is the largest ever adopted.

“It’s our human goal, but [the real goal] is whatever God puts in the hearts of these women,” she said.  “And these mission hearts that He’s given to the LWML are huge.  The women in the church know they’re making a difference in the lives of people everywhere.”

The new goal, she added, “will probably be small in God’s eyes.”

Contributions toward the goal are given by the LWML’s 200,000-plus members nationwide through individual mite-box offerings.

In other business at the convention, more than 600 delegates also chose 17 projects to fund with their offerings:

Delegates also chose Pittsburgh as the site of the LWML’s 2013 convention.  Other upcoming conventions will be held in Sioux Falls, S.D., in 2007; 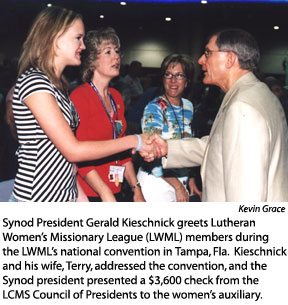 In her “president’s report” to the convention, Reiser thanked the women for the love and help they have given to others through their mite offerings and for bringing “gifts from the heart” to Tampa.  Those gifts totaled 1,850 items, including towels and washcloths, children’s underwear and socks, sheet sets, and health kits.  All were distributed to local agencies.

Reiser compared the willingness of LWML members to exceed the 2003-05 mission goal to 1996 Olympic gymnast Kerri Strugg, who helped win the U.S. team’s gold medal even though she was injured.

She applauded LWML members for “giving when you didn’t have to give.  Giving because you wanted to give, because you know how to love and how to help.”

Reiser urged local LCMS groups to keep Christ at the center of their planning and described how the organization is working to involve younger women.  More than 70 “Young Women Representatives” attended the Tampa convention, and some 120 women under age 40, trained as LWML leaders in 2004, now are training others.  “Teen LWML” recently was launched for youth, and several of those groups have been formed.

She shared her vision of LWML as “women young and old alike” who can be stronger together than they are apart.

In the past biennium, she said, LWML groups have been started on college campuses and at Hmong, Hispanic, and African-immigrant congregations.  And the “Heart to Heart Sisters Cross-Cultural Gathering,” held just prior to the convention, introduced 40 “women of color” to the LWML.

Reiser encouraged all Lutheran women to pray together at noon every Monday in an effort to “focus on unity and a combined mission effort.”

Besides exceeding their last mission goal by almost $100,000 and adopting the auxiliary’s most ambitious mission goal ever, convention-goers gave daily offerings for specific projects:

People in the news