A few years ago, LCMS North America mission leaders tried to identify the Synod’s “top 100” church-planting congregations — those that had started two or more “daughter” churches over the past five years.

“Our goal was to find 100 and we found about 50, I think,” said Dr. Robert Scudieri, associate executive director of LCMS World Mission’s National Mission Team.  Only “a couple” had started at least one new mission per year, Scudieri said, and they were non-white ethnic congregations that were reaching out to immigrants in urban areas.

“What’s really a concern, for me, is that we’re starting new missions, but we’re not starting nearly

enough new missions,” he said.  “And we won’t start enough new missions until the church body is committed to it, the leadership sees the need and the opportunity, and congregations become the major place that new churches start.”

That’s the way it was before World War II — churches started churches, according to Scudieri.  Then, during the Baby Boom years and the growth of suburbs, LCMS districts took over — they did the research, called the mission developers, bought the land, and made the decisions.

“So the churches got the message, and they pretty much stopped doing it,” Scudieri said.  And when congregations stop focusing on outreach in their communities, he added, “they become useless to God because that’s why He put them there.”

It’s time for the Synod’s 6,100 congregations to view themselves as “mission outposts,” Scudieri says.

“Ablaze! goals come at just the right time,” he said.  One of those goals, adopted by delegates at last summer’s Synod convention, calls for planting 2,000 North American congregations by 2017.

If just a third of LCMS congregations started one daughter congregation each in the next 12 years, that goal would easily be met, notes Scudieri.

Even congregations that see no nearby opportunities for outreach can grow, he says — but they may need to look outside their own communities. 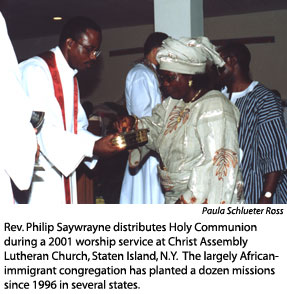 Christ Assembly Pastor Philip Saywrayne says the congregation’s 400-plus members are “encouraged to bring the whole world into this church,” not just Africans, “because we want to have every nation represented in our congregation, if possible.”

To encourage outreach among various ethnic groups, the church displays a flag from each nation represented by at least 10 to 15 Christ Assembly members.

Saywrayne tells parishioners, “You want a flag in there?  Go get 15 people from your nation!”  So far the sanctuary has flags from the United States, Liberia and Ghana.

As a missionary who serves the 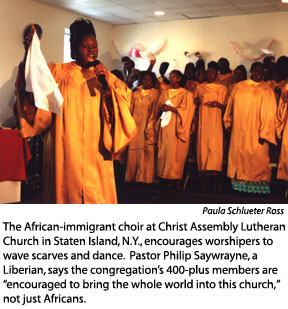 Synod’s Atlantic District, Saywrayne said almost all of the African-immigrant missions were started in private homes.  “Initially, they don’t have church buildings,” he said.  “I pray for God to provide the resources.  I reach out in faith.”

Acquiring a building is discussed only when a group of new worshipers reaches 25 to 30 people or more, he said, and then any and all options are considered.  Many times the mission will acquire an abandoned building with financial assistance from the district office or the Lutheran Church Extension Fund.  His own congregation, Christ Assembly, is in a warehouse that formerly housed a bagel factory.

But cross-cultural, urban ministries aren’t the only avenue for reaching out, notes Scudieri.  In Ellisville, Mo., an upper-middle-class suburb of St. Louis, the largely caucasian St. John’s Lutheran Church has opened two “alternative worship venues” outside its church building.  Two “warehouse services” are conducted for some 400 people each weekend in the St. John’s Youth Center, and another 100 worshipers gather at a YMCA auditorium six miles away.

With some 2,400 weekly worshipers, the original St. John’s campus is full — more than 100 cars are parked at a nearby shopping center each weekend because of a lack of on-site parking spaces, notes Senior Pastor Stephen Hower.

In one venue, the associate pastor teaches the message, and a worship team leads the songs, prayers, and Scripture readings.  At the YMCA location, the message is delivered by a St. John’s pastor via pre-recorded DVD, along with a live band and worship team for other facets of the service.

“It’s the same message that our senior pastor or other teaching pastor will deliver live in our sanctuary on Sunday,” Hower said.  The cost-saving system will enable the congregation “to open more venues in the region through the use of schools or public buildings that we don’t own,” he said.

The congregation’s strategic plan for the next decade calls for opening a new satellite site every two years.

“Our mission is clear — ‘We exist to reach the lost and strengthen the saved to live bold and courageous lives of Christian witness before a non-believing world,'” said Hower.  “We intend to do that to the best of our ability so long as God enables.  We can’t stop because God has filled our buildings and parking lot to overflowing.”

Saywrayne says African Immigrant Ministry, an LCMS mission society that targets African immigrants in the United States, has set its own goal for reaching 500,000 people by 2017.

“Everyone is on fire for Christ and moved to reach out to as many people as we can through God’s grace,” said Saywrayne, the