LWML brings together `women of color`

In a two-day meeting just prior to the opening of the Lutheran Women’s Missionary League convention in Tampa, Fla., more than 40 African American, African immigrant, Hispanic, and Hmong women — most of them unfamiliar w 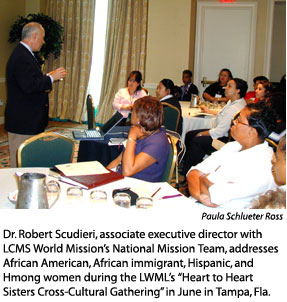 ith the LWML — met to celebrate their diversity and learn about the Lutheran women’s organization through the “Heart to Heart Sisters Cross-Cultural Gathering.”

It was the second such convention gathering sponsored by the LWML to reach out to non-white ethnic groups.  The first — held in 2003 in Oklahoma City — brought together some two dozen African American and Hispanic women.  Delegates to that convention voted to give $50,000 to this year’s expanded program.  The grant was used to pay travel and lodging expenses for participants.  LCMS World Mission contributed travel funds for the African immigrants, since mission staff had asked the LWML to include them in the Heart to Heart program. 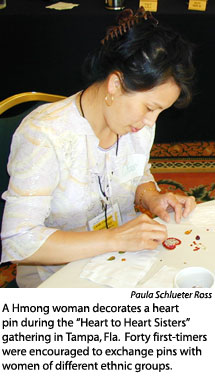 uence” upon their children, spouses, and congregations.  Most LCMS church workers attribute their career choices to their mother’s encouragement, according to Scudieri.

“The worst thing that you could do is not to use” that influence, he said.

Heart to Heart participants learned about the LWML and each other, and brainstormed ways to get involved in the organization in their home congregations.  They also attended the four-day LWML convention.

Jannie Vang, 21, said she and the other Hmong “Heart to Heart Sisters” have vowed not only to start a Hmong LWML group but to bring at least one person each to the next LWML convention in 2007 in Sioux Falls, S.D.

As a non-white Lutheran, did she feel out of place at the convention?  “No, it’s like we’re all sisters of Christ,” she said.  “Everybody is so caring and loving.”

Vang said her faith was “strengthened a lot” at the convention.  “You learn from not only being here but then, too, from other women.  You get to see what they go through and how strong their faith is — it helps you to build your own faith.”