Delivering the quilts was a simple gesture, really, but those unfamiliar with Native American culture might not appreciate its significance as well as Rev. Richard Latterner, a former LCMS missionary to several reservations in northern Minnesota.

Latterner, a Minnesota Chippewa, was born on a reservation just 40 miles from Red Lake, Minn., where a March 21 shooting rampage claimed 10 lives.  So 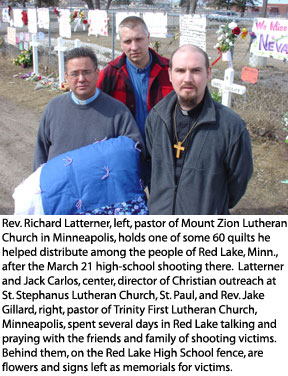 when he decided to go to Red Lake to see how he could help its hurting residents, he took about 60 quilts, handmade by members of the Lutheran Women’s Missionary League.

Latterner recalled handing one of the quilts to a young American Indian woman who had lost her cousin in the shootings.

“She had both arms wrapped around this quilt the entire afternoon,” he said.  “She cried and buried her face in this beautiful labor of love.”

Latterner told her that Lutheran women make the quilts for those who have experienced “loss and troubles in their lives,” and that they “also send their love and prayers.”

The young woman, he said, “was very touched.  In the Ojibwa tradition, you are honoring a person when you give them a handmade quilt.”

God, Latterner said, “opened amazing doors to share the Gospel and His love” in Red Lake and “uses even terrible situations like this to point people to the cross.”

Latterner has made several visits to Red Lake, in the days right after the shootings and more recently.  On March 28, he and two other LCMS church workers — Jack Carlos, director of Christian outreach at St. Stephanus Lutheran Church in St. Paul, and Rev. Jake Gillard, pastor of Trinity First Lutheran Church in Minneapolis — attended a wake at Red Lake’s Native Community Center.

The trio of Lutherans was “well-received” in Red Lake, which has no Lutheran church, Latterner said, and the three spent most of the day “visiting and praying with small groups of people.”  Many were from the Twin Cities area, and Latterner said he and his co-ministers left with “names, addresses, and phone numbers of Native people living in Minneapolis.  Two people called us [later] to visit and keep in touch.  Praise God!”

The Lutheran pastors led prayer services on “Law and Gospel … God’s disgust with sin, and His unconditional love for His people,” said Latterner.  They also distributed $400 in grocery and gas vouchers — a gift from Mount Zion Lutheran Church, Minneapolis — to families and their out-of-town guests.

Part of a $25,000 grant from LCMS World Relief is being used to assist Red Lake families with food and travel needs, Latterner added.  Members of many of these families work or attend school in the Twin Cities, nearly 300 miles away, and have limited incomes.  The grant also is enabling LCMS pastors to continue to minister to people there.

The 2 million Native Americans in this country represent a largely “unreached mission field,” Latterner said, and 90 to 95 percent of them “don’t know Jesus as Savior.”

That fact really “hit home” for him on the Red Lake reservation, he said.  Residents in the tight-knit community consider one another “extended family,” he explained, so it has been especially hard for them to comprehend “one of their own,” 16-year-old Jeff Weise, committing a crime against “family.”

“There are a lot of people who are hurting,” Latterner said.  “A lot of people are asking questions like, ‘How could God allow this?’ “

“The first tears that were shed were God’s tears,” Latterner told them.  “He mourns and does not plan these things to happen.”

People were receptive to the Gospel message, he said:  “I think it’s amazing how God works when a tragedy like this happens — the walls come down … [the people] open up because of the situation.”