When second-graders at St. Paul’s Lutheran School in New Orleans wrote to Santa this year, their letters sounded different from in the past.

Among their requests:  Please try to keep our ceiling from falling in again.  Please bring my neighbor things to put in his house because there’s not much there now.  Please bring more people to rebuild our city.

“They are more concerned about others, not just themselves.  And they are so good about welcoming our n 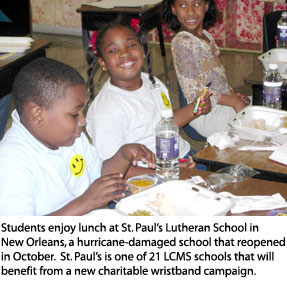 St. Paul’s is just of one 21 LCMS schools in Louisiana, Mississippi, Alabama, Texas, and Florida affected by the most devastating hurricane season on record.  Those schools include a total enrollment of more than 2,500 students and 150 teachers.

The schools’ hurricane-related challenges include physical damage, from lost textbooks to destruction so extreme that two New Orleans schools remain unable to reopen.  Other trials: tighter budgets caused by lower enrollments and families unable to pay tuition due to home and job losses; teachers struggling with their own personal property damage and lost income; and the frustrating uncertainty of insurance claims.

But faculty members with the largest Protestant school system in the United States say LCMS schools also have turned hurricane-related challenges into ministry opportunities.  Many have increased community outreach and welcomed new students and families.

At St. Paul’s in New Orleans, classes resumed in October, well before the public schools and one of first “businesses” to reopen after Hurricane Katrina, offering care and stability in a ravaged community.  By mid-December, enrollment had climbed to 74 children.  Thirty are new students, including one Muslim.

In Biloxi, Miss., Good Shepherd Lutheran Preschool has added six new students.  More are expected in January.  The school is charging parents only what they can afford to pay in this community, where Katrina destroyed or damaged more than 5,000 homes.

“The church elders wanted the school to reopen as soon as possible so the children would have a safe place to come,” said Preschool Director Rava Coyle.  And, she added, to give parents a few hours to deal with some overwhelming situations.

One “little” example of a post-hurricane challenge: Coyle’s once 10-minute commute to school now takes an hour because of damaged bridges.  “Unless they hav 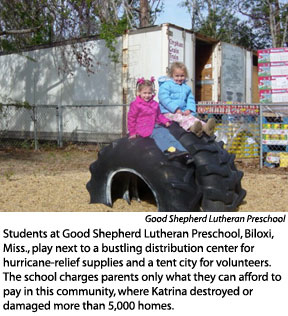 e been down here, people can’t imagine the devastation, not only here but throughout the whole Gulf Coast,” Coyle said.

In response to the continuing needs of LCMS schools directly affected by the hurricanes, LCMS World Relief/Human Care and LCMS School Ministry have launched a new charitable campaign.  The goal is to raise at least $250,000 through the sale of 250,000 “Reaching Out in Love — Hurricane Relief” wristbands.  That number represents the total 250,000 student-enrollment in LCMS preschools through high schools nationwide.

“Our Lutheran schools have been a blessing to the many people whose lives have been turned upside down by the hurricanes,” said Dennis Fangmann, LCMS World Relief/Human Care’s school liaison.  “Now, more than ever, our schools need an extra hand of support so they can continue to help children, families, and communities heal and grow.”

The purple-and-yellow-swirl wristbands are imprinted with the campaign theme.  Each wristband costs $1.  Campaign coordinators are asking LCMS congregations and schools to order in bulk and consider selling or giving the wristbands to individual members and students.  Proceeds will provide assistance to schools for repairs and rebuilding and for tuition assistance for students whose families have lost homes and jobs.

Here’s a sampling of how the hurricanes have impacted other LCMS schools, with challenges as well as opportunities:

LCMS World Relief/Human Care has provided hurricane relief for LCMS schools, including through grants to the Southern, Texas, and Florida-Georgia districts and more than $1 million in church-worker salary support, much of it for teachers.  The ministry also has made available $30,000 matching grants to each district partnering with hurricane-affected congregations and schools.  For more information, contact LCMS World Relief/Human Care at (800) 248-1930, Ext. 1274, or send an e-mail to rachel.mumme@lcms.org.

But more support is needed, Fangmann says, because needs in many schools and their communities are expected to continue for years to come.

“We thank all who have opened their hearts so generously to hurricane survivors,” Fangmann said.  “For children and families trying to put their lives back together, there is no better place than a Lutheran school.”

For more information about the “Reaching Out in Love” campaign or for a downloadable form to order wristbands, <A class="" href="http://www.lcms.org/graphics