The “Parable of the Talents” told by Jesus in Matt. 25: 14-30 offers incentive, support, and encouragement for people who lead and labor in His service.  His words of encouragement for using one’s talents for His kingdom have special meaning for women.

God has blessed women with many talents, including the gift of leadership.  How does the church encourage and equip women to use their gifts of le 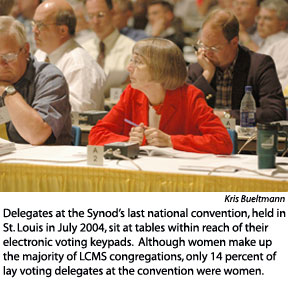 adership to further God’s kingdom?  This is not a new question within the church, but it is a question that must be revisited with respect and concern for the spiritual health of today’s church.

This commentary is in no way a veiled promotion of women’s ordination.  The purpose of this commentary, rather, is to consider women’s leadership in the church within the sphere of the laity alone.

Martin Luther was a strong advocate for women to use their gift of intellect as part of the priesthood of all believers, to learn to read the Bible and to teach biblical principles to their children.  Luther’s advocacy for compulsory education, especially when it included the education of girls, was fiercely opposed by his detractors.

Today, it is unthinkable to discourage educational opportunities for women and girls in our Lutheran schools.  Throughout the LCMS educational system — the largest Protestant school system in the United States — girls and boys learn side-by-side in early childhood centers, elementary schools, high schools, and universities.

J.S. Bach challenged church authorities and received heavy criticism and harsh sanctions for allowing a woman to use her gift of singing as a soprano in the choir.  Women’s voices are no longer silenced in our church choirs, and the harmony of male and female voices enhances the worship life of our congregations.

C.F.W. Walther strongly opposed women using their gifts of teaching as teachers in LCMS schools.  Today, women administrators, teachers, deaconesses, and directors of Christian education are called to work together with their male counterparts in service to the Lord and His kingdom in a variety of educational settings.

Women petitioned the LCMS for many years to use their gifts of administration to create a women’s organization within the church for the promotion of missions.  In 1941 the Synod endorsed the Lutheran Women’s Missionary League.  Over six decades, the national LWML has provided nearly $75 million for Missouri Synod mission work in 30-plus countries.

The movement within our culture from the Industrial Age to the Information Age is steadily progressing, and church governance structures will be influenced.  The good news is that the governance structure of the LCMS is a fine fit for these changes.  While other hierarchical church bodies face greater challenges in adjusting to this movement into the Information Age, our Synod’s emphasis on the importance of “walking together” should enable the LCMS to make this adjustment without too much disruption.

“Walking together” will take on greater meaning as we encourage and equip women to use their gifts of leadership within our church body.  Only a small number of women serve as lay delegates at district conventions, and just 14 percent of lay voting delegates at the last national LCMS convention in 2004 were women.

Women now serve on the LCMS Board of Directors, the Commission on Theology and Church Relations, the Commission on Ministerial Growth and Support, but these are only nominal representations.  Women also continue to be very much underrepresented in LCMS publications and periodicals.

Unfortunately, some women are hesitant and unsure of the proper use of their gifts of leadership among the laity of the church.

A March 6, 2000, Barna Research Update, titled “Women Are the Backbone of the Christian Congregations in America,” reports astounding statistics that show high participation levels of women in the spiritual life of churches.

However, many LCMS congregations report declining numbers of involvement by younger women.  In a previous commentary for Reporter (March 2006), Judy Christian, director of child and family ministry for the Synod’s Board for District and Congregational Services, asked, “Where are the children?”  Perhaps a follow-up question could be, “Where are their mothers?”

Martin Luther clearly understood the leadership and influence of mothers in their homes.  That’s why he challenged the status quo within the church and encouraged women to learn to read and teach biblical truths to their children.

It is time to challenge the status quo in our church body and recognize and encourage women to use their gifts of leadership among the laity.  We must provide opportunities for women to grow in the unique gifts of leadership and character that God gives to them for service to Christ in the church and the world.

Here are some suggested goals