What can your congregation do?

Sending a child away to college is a bittersweet rite of passage for most parents.

On the one hand, parents are happy to see their kids maturing.  They are on the path to c 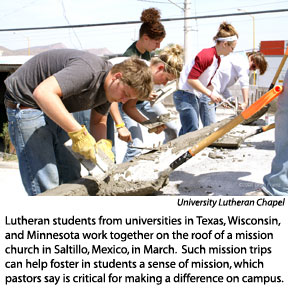 hoosing a vocation, among other things, and becoming independent of their parents in a variety of ways.

On the other hand, sending your child to a college or university campus can strike fear in the heart of the strongest of Christian parents, fear strong enough to drive them to their knees in prayer.

What kinds of values and worldviews is their child going to encounter there?  What kind of people are they going to meet that will influence them, for better or for worse?  Perhaps most important, will they continue to live out the faith of their baptism, the faith which parents and the home congregation have tried to nurture and encourage for the first 17-18 years of their lives?

What can your congregation do to ensure that its young people, as they head off to college, will side-step some of the temptations and pitfalls that they are sure to encounter, remain firmly entrenched in the Christian faith, and even make an eternal difference in the lives of fellow students?

What’s happening on college campuses may cause parents to pause, wonder, shudder, and pray, pleading for God’s protection for their child as he or she heads off to college.

Here’s a cross section of some recent events:

Such is the atmosphere on many college and university campuses these days.

So, what can your congregation do?

Rev. Carl Selle is in his second stint as campus pastor at the University of Wisconsin-Stevens Point.  He says the most basic action that any congregation can take is to make sure the campus ministry or contact congregation where the student will attend college is aware that the student is there.

“That sounds so basic,” Selle says, “but it’s a big problem.  A student’s home congregation or parents have to be very intentional about it.  We can’t serve and minister to the student if we don’t know they are on campus.”

Once the student is on campus, sending care packages, birthday cards, and baptism birthday cards are ways that the home congregation can let the student know, “We’re thinking of you; we’re praying for you,” says Selle.  “Even an occasional visit from the student’s home pastor, if that’s practical, is a great way to encourage and support the student.”

Parents of a student should be encouraged to play a vital role in connecting students to the local LCMS campus ministry.  Doug and Alice Wilhelm, members of  Epiphany Lutheran Church in Castle Rock, Colo., have sent two daughters to Texas A&M University and one to the University of Texas-Austin.  In all three cases, Alice says, the girls were open to visiting the campus chapel during their summer orientation visit.

“We said to the girls, ‘This is something we’d like to do with you,’ ” says Alice.  “They were a little apprehensive, so taking them by the church, walking in with them, that can make all the difference.  When we got to the campus chapel, the doors were open, and the campus pastor welcomed us with open arms.”

A question our church body should be asking itself, according to Rev. Lee Meyer, campus pastor at Alleluia Lutheran Church and Student Center in Tempe, Ariz.: Is it possible for a student not only to survive the college experience with their Christian faith intact, but also to go on the spiritual offensive and be a student missionary on campus?

Meyer strongly encourages LCMS congregations be more pro-active in preparing their young people to see the college or university campus as a mission field.  Meyer encounters many LCMS students at Arizona State University whose idea of living out their Christian faith simply means attending worship on Sunday morning — nothing more.

“They’re not asking themselves, ‘How can I serve Christ and his mission on this campus?’ ” Meyer says.  “Instead, they have more of a self-centered concern, ‘How can this place meet my needs?’ “

As a campus pastor, one of his biggest challenges is to develop those Lutheran students who come with a “What’s-in-it-for-me?” attitude into leaders who have a strong sense of God’s mission.

“If they came to campus with a sense of calling to mission, with a sense of  ‘I am a missionary,’ ” says Meyer, “with the support and encouragement of their home congregation, it would make our LCMS campus ministries far more effective in reaching the lost on campus.”

“Each congregation should evaluate how much ‘hands-on’ experience their young people are getting,” Meyer says.  “Whatever can be done to foster the mindset that ‘I am a missionary even as I am a college student’ should be done.”

That might include a “rite of sending” for college students that can be used in the context of congregational worship, before they head off to school in late summer. The rite can be downloaded from the Lutheran Campus Ministry Association Web site.

The one ingredient that Meyer, Selle, and Wilhelm all cited as a must in spiritually preparing young people for college is prayer.

“Pray for your college kids by name on a regular basis during worship,” says Selle. “There is nothing more