Commentary: `We Need to Reach the Latinos!`

So goes the cry, but is the Synod really getting the job done?

What we say as a church body is not always consistent with what we do.  Consider our attitude toward Latinos.

The Missouri Synod wants to share the wonderful news of salvation in Christ and has identified the U.S. Latino population as an especially important mis 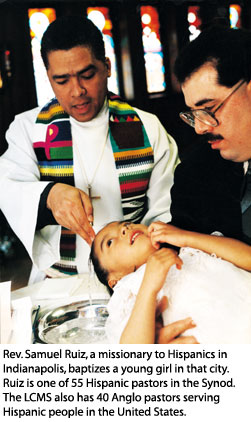 sion field. Already the largest minority group in the United States, Latinos will make up the majority of the population in a number of important states by 2020.

Enthusiastic LCMS mission leaders assert, “We need to reach the Latinos!”  But the Synod actually has acted in ways that marginalize our 10,000 Latino members and that undermine our capacity to relate in meaningful ways to unchurched Latinos.

Three issues highlight the divergence between what we say and what we do as regards our Hispanic neighbors.

First, we lack staffing to facilitate Hispanic ministry.  We do not have people in leadership positions who can communicate with Spanish speakers or who can fully understand the cultural realities faced by Latinos.

The Synod at one time did support Hispanic work through a National Hispanic Counselor in St. Louis, but the focus and title of this position were changed over time, and it finally was eliminated.  Now there is no one whose sole purpose is to provide the expertise needed to support existing and new work among Latinos.

Not only Latinos, but the entire Synod suffers as a result.  Anglo pastors and district leaders attempt well-intentioned ministry to Hispanics, but without advice from seasoned Hispanic leaders and resource people, we see an increase in fiscally and spiritually costly mistakes.  We have failed to connect to Latinos and grasp the Latino worldview, and so we do not relate to a huge segment of the population — a cost that will become more apparent in years to come.

Most Hispanic LCMS pastors send their children to local community colleges, state universities, or evangelical colleges because they cannot afford LCMS schools.  And the most effective (and cost-effective) program for preparing Spanish-speaking church workers, the Hispanic Institute of Theology (HIT), has been cut from the Synod’s budget.  Had Concordia Seminary, St. Louis, not adopted the HIT, the effect of these budget cuts would have been to decapitate Hispanic ministry.

The HIT is the only LCMS program dedicated to preparing Spanish-speaking men and women to serve the church.  It has produced dozens of Hispanic pastors, deaconesses, and lay workers.  Some 145 men and women currently take HIT extension courses.  Another 14 men are taking seminary-level courses by meeting with professors six times a year, while completing assignments and readings independently.  Ten men and women in the Florida-Georgia District are receiving seminary- and deaconess-level instruction in Miami from HIT faculty.  By the end of 2006, seven more men will have been certified for ordination.

Some HIT critics say that its program is not on par with M.Div. programs and is therefore inferior.  Others criticize the HIT for not preparing workers fast enough. Both criticisms fail to recognize the HIT’s record of success and fail to grasp that the HIT takes students who often have only a very basic level of academic and Biblical foundation, and then prepares them for certification.  No other program or educational model has come close to preparing any significant number of Spanish-speaking workers for the church.

Because monolingual and inner-city Hispanic parishioners typically do not have the financial resources to maintain their own ministries, long-term subsidized funding is more necessary for Hispanic work than for other ministry starts.

Formerly, finding ways to pay for at least a full-time church worker was seen as part of doing outreach to Hispanics.  Today, though, the popularity of planting new churches as a mission strategy — newer congregations are more effective than old ones for reaching new people — and the financial demands that church planting places on districts have made long-term subsidy of Hispanic work a lower priority.

Funding models have been proposed that would fund new Hispanic mission starts with the expectation that they would repay any monies invested in them.  But the possibility of a Hispanic church in a colonia or in the inner city becoming self supporting is miniscule.

If we think of outreach among Latinos in purely financial terms, Hispanic ministry has a very poor return on investment.  Such thinking, however, marginalizes even the opportunity to reach out to Latinos.  It suggests that Latino ministries will be served perpetually by “worker priests.”  It suggests that we will have different castes of pastors, some with fully funded salary and benefit packages, others — laboring in the most challenging of mission fields — not even offered voice and vote in our Synod, much less a salary.

These problems likely result from the Synod not understanding the Latino mind and culture and its lacking a Hispanic lens through which to view work among Hispanics. (At the same time, Hispanics have failed to understand the LCMS mindset, culture, and value system, as well as the expectations placed upon them.  They also have failed to see that what is “normal” or acceptable in the Latino culture may be perceived as “failure” in the minds of mainstream LCMS people.)

What can we do?