“This convention just shows you what our auxiliaries can do,” a delegate at the International Lutheran Laymen’s League’s 89th international convention told Reporter.  The convention was h 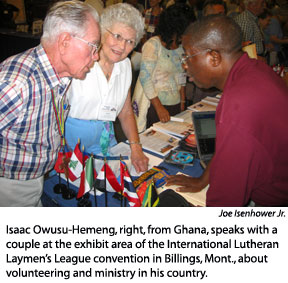 Nearly 1,200 people converged on Big Sky Country for the convention — LLL members and their families from the United States and Canada, and representatives of partner operations in more than 40 other countries.

And what this convention showed was that this auxiliary — through its programs known as Lutheran Hour Ministries (LHM) — places top priority on conducting Christian outreach through media and equipping Lutherans (especially laypeople) for outreach and volunteer service.

Outreach was a major emphasis throughout the three-day convention, as leaders of the 100,000-plus-member auxiliary described a new five-year LHM strategic plan to further help LCMS congregations and worldwide mission partners equip members for outreach.

LHM Executive Director Greg Lewis spoke about the importance of 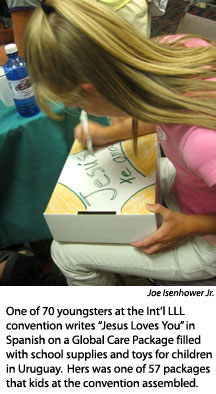 outreach, especially by laypersons, during the opening business session.

“Sharing God’s love and grace with someone who does not know [Him] is too big for just professional church workers,” Lewis said.  “We, the laity of the church, have to help in this battle to reach the lost.”

In a video segment, Lewis introduced the five-year strategic outreach plan approved earlier this year by the League’s Board of Governors.

“I am excited about this powerful new direction that encourages the men, women, and young people in our churches to engage in personal evangelism and local outreach ministry within their own communities,” Lewis said.  “It’s lay driven, has a simple approach, and measurable effectiveness.”

Lewis said that the League is “so grateful for the enthusiastic support of our new strategic goals” from LCMS President Gerald B. Kieschnick.

In videotaped remarks that followed, Kieschnick, who at the time was attending the LCMS Southern District convention, addressed the Billings convention.

“There is great urgency in sharing the Good News of the saving Gospel of Jesus Christ with the millions and millions of unreached and uncommitted people throughout the world,” Kieschnick said.  “I urge you to participate in this new partnership that celebrates and deploys the resources God has given us to use in His service.”

“I am very excited to know that LHM is placing a greater emphasis on partnering with congregations,” 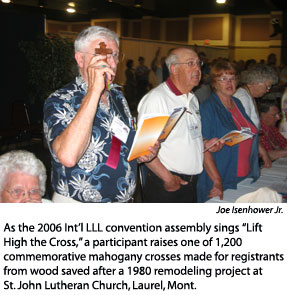 Kieschnick said in a separate statement his office provided to Reporter.

Kieschnick added that LHM’s supplying congregations with outreach tools “will help them make connections with the unchurched in their community, which will go a long way in helping us attain our Ablaze! goal of reaching 100 million uncommitted individuals worldwide with the Gospel by 2017.  LHM is taking the right steps.”

Dr. Robert Roegner, executive director of LCMS World Mission, told Reporter that LHM has been “a significant partner … within the Ablaze! initiative and movement.

“They bring to the table significant abilities in outreach training, radio and television ministry, and they assist LCMS and our partner churches around the world, especially through marshalling volunteers, with materials for Bible correspondence courses, tracts and other faith- and outreach-oriented media,” Roegner said.

“I have nothing but the highest regard for the work of the LLL and our partnership,” Roegner added.  “It’s a great example of what we can do better together than either of our organizations could do separately.”

As a part of Ablaze!, LHM has committed to tallying 25 million “critical events,” in which Lutherans share their faith with those who are unchurched or uncommitted to faith in Christ.

The year 2017 — the point set for reaching the Ablaze! goals — also will mark the 100th anniversary of the Lutheran Laymen’s League, which was formed when several laymen banded together to provide financial support for LCMS church workers.

In addition to hearing presentations about LHM programs and outreach worldwide, convention participants worshipped, sang hymns, renewed friendships and established others, browsed an exhibit area, ate meals en masse in the Montana Convention Center and under a big white tent outside, conducted business, and learned about outreach and other volunteer opportunities in a dozen workshops comprising a first-ever “Outreach Expo” — all under the convention theme of “Glorify the Lord.”

There also were activities for the more than 70 young children and teenagers at the convention, such as Bible study and daily devotions; a hike in the foothills of Montana’s Beartooth Moun 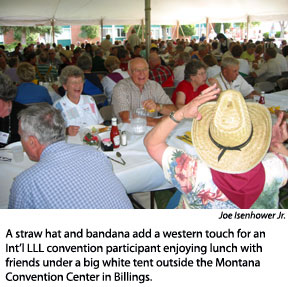 tains; and a servant event when they assembled 57 Global Care Packages of school supplies and toys for school children in Uruguay — adding faith-related personal messages and art.

Convention-goers and local Lutherans comprised the audience for a Saturday afternoon Lutheran Hour rally, with the message delivered by Dr. Ken Klaus, speaker of “The Lutheran Hour” — tap