Laborers For Christ (LFC) is gearing up for a busy year and can use as many as 100 new people with “a heart for ministry” to help congregations throughout the country tackle building projects.

The Synod’s church-construction group, which uses mostly retired workers and on-site volunteers to 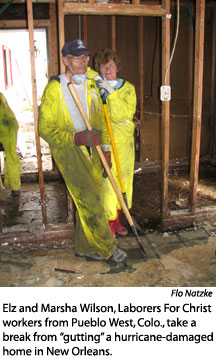 keep costs low, plans to staff 25 projects this year.  LFC organizers don’t yet know if the organization will be assisting hurricane victims, since no requests for help have been received from that area.

But several LFC couples already have helped out there on their own, financing the trip themselves.

Elz and Marsha Wilson of Pueblo West, Colo., who have completed 10 LFC projects since they joined the organization in 1998, said they “felt God was calling us into disaster relief” shortly after Hurricane Katrina struck the Gulf Coast.

Marsha said she prayed that God “would send us somewhere other than New Orleans,” perhaps Biloxi, Miss., but of course New Orleans is where she and her husband ended up.  Now, after three months in New Orleans and Covington, La., she adds, “I praise God that He did not fulfill that request” to go elsewhere.

The Wilsons and seven other retired couples, including three with LFC experience, answered a call from the Synod’s North Wisconsin District, which is placing disaster volunteers through two LCMS congregations — Prince of Peace, New Orleans, and Holy Trinity, Covington.

The group did mostly yard work — hauling and burning downed trees and clearing debris — but also “gutted” homes and did some repairs on torn and water-damaged roofs and walls.  With an average age of about 70, the volunteers worked on nearly 100 buildings, including four LCMS churches.

“We aren’t exactly in the prime of life — we just think we are,” said Marsha Wilson, 61.  In spite of scratches, bruises, sunburns, and poison ivy, the group stayed healthy, although they labored “with aching, arthritic body parts and sore, overstressed muscles,” she said.

In the end, “Not a one of us would change a single experience we have had,” Wilson said.  “We have laughed and cried together, comforted and teased each other, and watched as God has worked His miracles in us and in the people we have served.  We have seen hope restored in so many lives, we have seen anger stilled and joy renewed, blessings remembered and lives changed.”

People who had left the church returned, a couple struggling with marital difficulties reconciled, and homeowners whose damages were “overwhelming” were overwhelmed and buoyed by the help they received from volunteers they did not know, according to Wilson.

“We know we didn’t do that.  We know that God did that through us,” she said.

LFC Administrator Marcy Scholl said she wasn’t surprised by what the Wilsons did.  “The reason they went is because they are Laborers For Christ workers — that’s the kind of people that are active in Laborers For Christ,” Scholl told Reporter.

Started by the Synod’s Colorado (now Rocky Mountain) District in 1980, Laborers For Christ today is a ministry of the LCMS Lutheran Church Extension Fund.  To date, LFC crews have completed more than 700 churches and church additions, schools, and other church-related building projects — “more than 10 percent of all facilities in use in The Lutheran Church–Missouri Synod,” according to LFC Executive Director Curt Connolly.

The organization welcomes “people in every skill level, from those with no experience to construction professionals,” said Dan Baker, LFC associate director.  “The only requirement is to have a heart for ministry.”

LFC Project Manager Willie Eichmann, 72, thought he would “saw a few pieces of wood and hammer some nails” and be “out of there” in a week or two when

he and his wife, Eleanor, began their first LFC project in 1999 in Plymouth, Ind.  Instead, he became project manager and stayed for two months when the project’s foreman had to leave the job early.

Now, six projects later, Eichmann said he and his wife consider LFC “the most rewarding occupation we’ve ever been in.”  The organization “isn’t just building buildings — it’s bringing congregations together,” he said.

“Laborers” typically live in their own recreational vehicles at the construction site, begin and end each day with prayer, and worship with members of the congregation they are serving.  Eichmann’s made so many friends through LFC he can’t keep track of them, he says.

But there is one drawback: “The hardest part is when you’re finished with a job and have to leave.”

For more information about Laborers For Christ, or to request an application or arrange to visit an LFC project in your area, contact the LFC office in St. Louis at (800) 854-4004, Ext. 6446, or laborers@lcef.org.